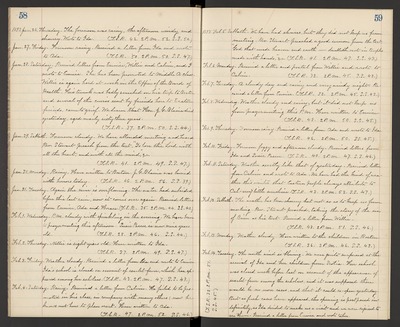 Jan. 28. Saturday. Received letters from Eunice, Willie and Calvin, and I wrote to Eunice. She has been promoted to middle A class. Willie is again hard at work in the Office of the Board of Health. His trunk was badly smashed on his trip to Boston and several of the curios sent by friends here to Eastern friends, came to grief. We learn that Hon. J.G. Blaine died yesterday, aged nearly sixty three years. (T.S.R. 37. 2 P.M. 50. S.S. 44.)

Feb. 11. Saturday. Weather exactly like that of yesterday. Received letter from Calvin and wrote to Ada. We have had the kind of weather this winter that Eastern people always attribute to Cal.- very little sunshine. (T.S.R. 43. 2 P.M. 52. S.S. 47.)

Feb. 14. Tuesday. The north wind is blowing. We were quite surprised at the arrival of Ida and her children from Scotia. Her school was closed week before last on account of the appearance of scarlet fever among the scholars, and it was supposed there would be no more cases, and that it could re-open yesterday. But as fresh cases have appeared, the opening is postponed indefinitely, so Ida decided to make us a visit and we were rejoiced to see them. Received a letter from Eunice and wrote to her. (T.S.R. 32. 2 P.M. 51. S.S. 45.)