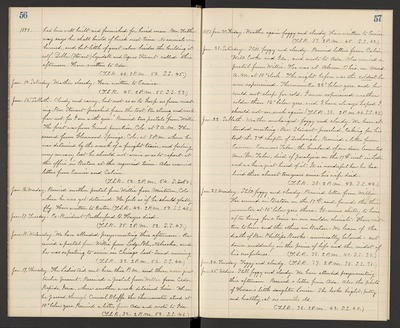 1893. had been built and furnished for hired men. Mr. Tretheway says he shall build of brick next time. No animals were burned, and but little of great value besides the building itself. Debbie (Stewart) Lyndall and Agnes Stewart called this afternoon. Have written to Ada. (T.S.R. 40. 2 P.M. 50. S.S. 45.)

Jan. 15. Sabbath. Cloudy and rainy, but not so as to keep us from meeting. Rev. Stewart preached from the text, "Be strong and work; fear not for I am with you." Received two postals from Willie. The first was from Grand Junction, Colo. at 8 A.M. The seemed from Glenwood Springs, Colo. at 8 P.M. where he was detained by the wreck of freight train, and feeling very uneasy but he should not arrive so as to report at the office in Boston at the required time. Also received letters from Eunice and Calvin. (T.S.R- 52. 2 P.M. 54. S.S. 50.)

Jan. 18. Wednesday. We have attended prayermeeting this afternoon. Received a postal from Willie from Lodge Pole, Nebraska, and he was expecting to arrive in Chicago last Sund. morning. (T.S.R- 33. 2 P.M. 52. S.S. 44.)

Jan. 19. Thursday. The Ladies Aid met here this P.M. and there were just twelve present. Received a postal from Willie from Cedar Rapids, Iowa, where another wreck detained him. When he passed through Council Bluffs, the thermometer stood at 10- below zero. Received a letter from Ada and wrote to Ida. (T.S.R. 32. 2 P.M. 52. S.S. 46.)

Jan. 21. Saturday. Still foggy and cloudy. Received letters from Calvin. Will Cooke and Ida, and wrote to Ada. Also received a postal from Willie. He was at Akron, O his, on Mond. A.M. at 10 o'clock. The night before was the coldest he ever experienced. Thermometer 22 Degrees below zero, and he could not sleep for cold. I never experienced weather colder than 16 degrees below zero, and I have always hoped I should not see such again. (T.S.R. 38. 2 P.M. 44. S.S. 43.)

Jan. 22. Sabbath. Weather unchanged - foggy and cloudy. We have attended meeting. Rev. Stewart preached, taking for his text the 3rd chapter of Zechariah. Received a letter from Eunice. Emmons Tabor, the hushband of our dear lamented Mrs. Dr. Tabor, died of paralysis on the 17th inst in Lodi, and we have just heard of it. It is wonderful how he has lived these almost ten years since his wife died. (T.S.R. 38. 2 P.M. 43. S.S. 42.)

Jan. 23. Monday. Still foggy and cloudy. Received letter from Willie. He arrived in Boston on the 17th, and found the thermometer at 10 degrees below zero there. It seems chilly to him after being for a time in our milder climate. Have written to him and the others in Boston. We learn of the death of Rev. Phillips Brooks - universally beloved - cut down suddenly in the prime of life and the midst of his usefulness. (T.S.R. 38. 2 P.M. 40. S.S. 38.)