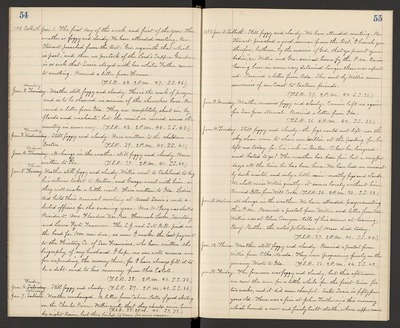 1893. Sabbath. Jan. 1. The first day of the week and fist of the year. The weather is foggy and cloudy. We have attended meeting. Rev. Stewart preached from the text. "God requireth that which is past," and then we partook of the Lord's Supper. Grandma is so sick that Susie stayed with her while Father came to meeting. Received a letter from Horace. (T.S.R. 42. 2 P.M. 47. S.S. 46.)

Jan. 2. Monday. Weather still foggy and cloudy. This is the week of prayer and is to be observed in union of the churches here. Received a letter from Ida. They are completely shut in by floods and washouts, but the mail is carried across the country in some way. (T.S.R. 42. 2 P.M. 44. S.S. 43.)

Jan. 5. Thurs. Weather still foggy and cloudy. Willie went to Oakland to buy his return ticket to Boston, and George went with him, so they will make a little visit. Have written to Ida. Ladies' Aid held their annual meeting at Aunt Susie's and elected officers for the ensuing year. Mrs. McGary was elected President, Mrs. Flanders, Vice Pres. Hannah Locke, Secretary, and Laura Foote, Treasurer. The S.J. and S.N.R.R. paid us the bond for $1000. now due, so now I make the last payment to the History Co. of San Francisco, who have written the biography of my husband. I hope no one will censure me for expending the money thus, for I have always felt it to be a debt owed to his memory from this Estate. (T.S.R. 38. 2 P.M. 41. S.S. 38.)

Jan. 7. Saturday. Weather unchanged. A letter from Calvin tells of good skating on the Charles River. Willie wrote that they should arrive home by night train, but they failed to come for some reason. (T.S.R. 38. 2 P.M. 40. S.S. 38.)

1893. Jan. 8. Sabbath. Still foggy and cloudy. We have attended meeting. Rev. Stewart preached a good sermon from the text, "I beseech you therefore, brethren, by the mercies of God, that ye present your bodies", D.C. Willie and Geo. arrived home by the P.M. train having been in some way detained longer than was expected. Received a letter from Ada. She sent by Willie some souvenirs of our Coast to Eastern friends. (T.S.R. 37. 2 P.M. 40. S.S. 38.)

Jan. 10. Tuesday. Still foggy and cloudy- the fogs would not lift nor the sky clear even cheer our Willie at the parting, for he left us today for his work in Boston. O how he lingered - and hated to go! The weather has been fair but a very few days all the time he has been here. We have had an unusually dark winter, and only a little rain - mostly fogs and clouds. We shall miss Willie greatly - it seems lonely without him. Received letter from Will Cooke. (T.S.R. 36. 2 P.M. 38. S.S. 38.)

Jan. 11. Wednes. No change in the weather. We have attended prayermeeting this P.M. Received a postal from Willie and letter from Ada. Willie was at Blue Canyon - tells of his sorrow at leaving. Benj. butler, the noted politician of Mass. died today. (T.S.R. 37. 2 P.M. 40. S.S. 40.)

Jan. 13. Friday. The forenoon was foggy and cloudy, but this afternoon we saw the sun for a little while for the first time for two weeks, and it did seem cheerful. Sister Susie is fifty four years old. There was a fire at John Tretheway's this morning which burned a new and finely built stable, whose upper rooms