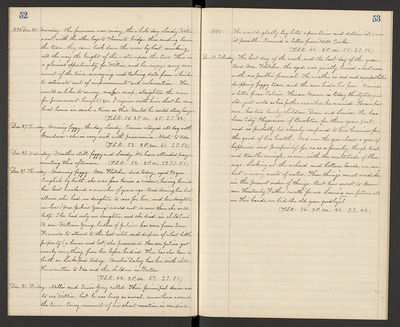 1892. Dec. 26. Monday. The forenoon was rainy, the whole day cloudy. Willie went with the other boys to Clements bridge, then sending home the team, they came back down the river by boat, marking all the way the height of the water upon the trees. This is a glorious opportunity for Willie, and he enjoys every moment of the time, surveying and taking data from which to estimate cost of improvements and reclamation. He would so like to survey, make a map, straighten the river for permanent benefit, D.C. I rejoice with him that he can be at home in such a time as this. Would he could stay longer. (T.S.R. 56. 2 P.M. 65. S.S. 63.)

Dec. 29. Thursday. Morning foggy. Mrs. Fletcher died today. aged 90yrs. English by birth, she was four times a widow, having buried her last husband a number of years ago. And during her last illness, she had no daughter to care for her, and her daughter- in-law (Mrs. Julius Young) would not do more than she could help. She had only one daughter, and she died in childhood. A son - William Young, brother of Julius - has come from San Francisco to attend to the last rites, and dispose of what little property ( a house and lot) she possessed. Her son Julius got nearly everything from her before he died. There has also been a birth in Lockeford today. Amelia Daley has her sixth child. Have written to Ida and the children in Boston (T.S.R. 42. 2 P.M. 57. S.S. 51.)

Dec. 30. Friday. Nellie and Susie Jory called. Their principal desire was to see Willie, but he was busy as usual, somewhere around the town. Every moment of his short vacation is occupied,

Dec. 31. Saturday. The last day of the week, and the last day of the year. And Mrs. Fletcher, the aged, was quietly buried about noon with no public funeral. The weather is sad and sympathetic dropping foggy tears, and the sun hides his face. Received a letter from Calvin. Horace Mann is today thirty two years old, just as old as his father was when he married. Horace, however, has two lovely children, Dean and Louise. He has been City Physician of Brockton for three years past, and is probably too closely confined to his business for the good of his health. And now the year closes - a year of happiness and prosperity for us as a family - though trials and troubles mingle, as ever, with the multitude of blessings. Looking at the orchard and bottom lands, we see but a weary waste of waters. These things "must needs be" in the present order of things. But how sweet to know our Heavenly Father "careth" for us. Leaving our future all in His hands, we bid the old year goodbye! (T.S.R. 36. 2 P.M. 48. S.S. 43.)