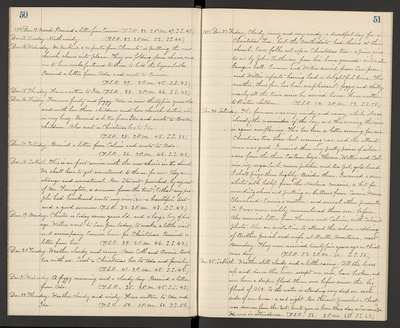 Dec. 14. Wednesday. Mr. Jenkins, a carpenter from Clements, is putting the new church chairs into place. They are folding opera chairs, and are to have racks fastened to them to hold the hymn books. Received a letter from Ada and wrote to Eunice. (T.S.R. 29. 2 P.M. 45. S.S. 43.)

Dec. 16. Friday. Forenoon frosty and foggy. Ada is now thirty five years old and with her three children and her church duties, she is very busy. Received a letter from Ida and wrote to Boston children. Also sent a Christmas box to Ida. (T.S.R. 28. 2 P.M. 45. S.S. 38.)

Dec. 18. Sabbath. This is our first service with the new chairs in the church. We shall have to get accustomed to them, for now they seem strange and unnatural. Rev. Stewart preached, by request of Mr. Farrington, a sermon from the text, "O that my people had hearkened unto my voice", D.C. - a beautiful text and a good sermon. (T.S.R. 32. 2 P.M. 48. S.S. 43.)

1892. Dec. 23. Friday. Cloudy, rainy and very windy - a dreadful day for a Christmas Tree, but the Methodists had theirs at their church. Our folks set up a Christmas tree - a pine given to us by John Tretheway from his home grounds - in Uncle George's hall. Eunice and Willie arrived from San Jose, and Willie reports having had a delightful time. The weather, thus far, has been unpleasant, foggy and chilly nearly all the time since he arrived home. Have written to Boston children. (T.S.R. 52. 2 P.M. 53. S.S. 58.)

Dec. 24. Saturday. The forenoon was very windy and rainy, while it was cloudy the reminder of the day, and this evening the river is again overflowing. This has been a better evening for our Christmas tree than last evening was, and the attendance was good. I received three very pretty pieces of silverware from the three Eastern boys - Horace, Willie and Calvin, viz; sugarbowl, cream pitcher and tea-pot, gold-lined. I shall prize them highly. Besides there, I received a nice white silk hdkf, from the Nashua cousins, a kit for mending shoes and putting on buttons from Cousin Maria Blanchard - Eunice's mother - and several other presents. So I was more richly remembered than ever before. Also received letters from Horace and Calvin with Calvin's photo. Also an invitation to attend the silver wedding of Brother Josiah and wife at Butte, Montana, next Monday. They were married twenty five years ago on Christmas day. (T.S.R. 53. 2 P.M. 60. S.S. 56.)

Dec. 25. Sabbath. Weather still cloudy and a little rainy. All the levees up and down the river, except our own, have broken and we have a deeper flood than ever before since the big flood of 1862. So the water is standing very deep on each side of our levee - a sad sight. Rev. Stewart preached a Christmas sermon from the text, "Unto you is born this day a Saviour" D.C. We were in attendance. (T.S.R. 56. 2 P.M. 65. S.S. 63.)