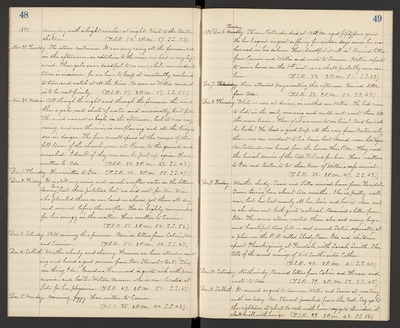 Nov. 29. Tuesday. The storm continues. It was very rainy all the forenoon, and in the afternoon, in addition to the rain, we had a very high wind. These gales seem dreadful to us now, while our windmill tower is insecure, for we have to keep it constantly anchored to trees, and watch it all the time. As soon as Willie comes, it is to be reset firmly. (T.S.R. 57. 2 P.M. 57. S.S. 55.)

Nov. 30. Wednes. All through the night and through the forenoon the wind blew a gale, and sheets of water and occasionally hail fell. The wind was not so high in the afternoon, but it was very rainy, and now the river is over flowing and all the bridges are in danger. The four small spires at the corners of the bell tower of the church, were all blown to the ground and smashed. I doubt if they can ever be put up again. Have written to Ada. (T.S.R. 54. 2 P.M. 47. S.S. 47.)

Dec. 2. Friday. It is still very rainy and much overflow water on the bottoms many have lost their potatoes, but we did not, for Mr. Wise, who planted them on our land on shares, got them all dug and secured before the overflow. He is highly commended for his energy in the matter. Have written to Eunice. (T.S.R. 51. 2 P.M. 54. S.S. 52.)

Dec. 4. Sabbath. Weather cloudy and showery. However we have attended meeting and heard a good sermon from Rev. Stewart text, "This one thing I do." Grandma Hammond is quite sick with pneumonia, and has Dr. Wilton Mason, who is now located at Lodi, for her physician. (T.S.R. 47. 2 P.M. 51. S.S. 47.)

1892. Dec. 6. Tuesday. Thomas Ostrander died at 10 P.M. aged fiftyfour years. He has lingered in great suffering for sixteen days since he was burned in his saloon. How dreadful it all is! Received letters from Eunice and Willie and wrote to Eunice. Willie expects to arrive home on the 8th inst. so we shall probably soon see him. (T.S.R. 33. 2 P.M. 51. S.S. 43.)

Dec. 8. Thursday. While we were at dinner, in walked our Willie. He had come to Lodi in the early morning and could not wait there till the noon train. How glad we were to see him! And how well he looks! He had a good trip all the way from Boston, only there was one accident to his train last Mond. near Las Vegas. Mr. Ostrander was buried from the house this P.M. They used the burial service of the Odd Fellows for him. Have written to Ida and Boston, to let them know of Willie's safe arrival. (T.S.R. 30. 2 P.M. 47. S.S. 43.)

Dec. 9. Friday. Weather cloudy. Susie and Lilla arrived home from Ferndale Susie having been absent two months. She is pretty well now, but has lost nearly all her hair and has it close cut, so she does not look quite natural. Received a letter from Ida. The severe storm visited them also, and many large and beautiful trees fell in and around Scotia, especially at a place on the R.R. called Shady Run. Ida and children spent Thanksgiving at Ferndale, with Sarah Smith. She tells of the second marriage of Will Smith's sister Esther. (T.S.R. 40. 2 P.M. 41. S.S. 40.)