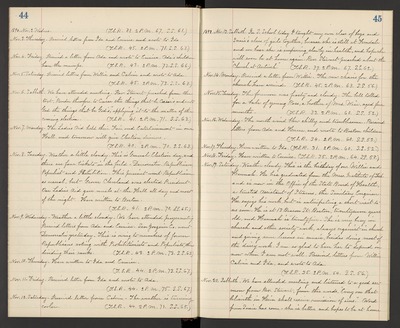 Nov. 6. Sabbath. We have attended meeting. Rev. Stewart preached from the text," Render therefore to Caesar the things that be Caesar's and unto God the things that be God's," applying it to the matter of the coming election. (T.S.R. 41. 2 P.M. 71. S.S. 63.)

Nov. 8. Tuesday. Weather a little cloudy. This is General Election day, and there are four tickets in the field - Democratic. Republican, Populist and Prohibition. This precinct went Republican as usual, but Grover Cleveland was elected President. Our Ladies Aid gave meals at the Hall all day and most of the night. Have written to Boston. (T.S.R. 41. 2 P.M. 70. S.S. 65.)

Nov. 19. Saturday. Weather cloudy. This is the birthday of our Willie and Hannah. He has graduated from the Mass. Institute of Tech. and is now in the Office of the State Board of Health, a trusted Assistant of Stearns, the Sanitary Engineer. He enjoys his work, but is anticipating a short visit to us soon. He is at 13 Beacon St. Boston, twentyseven years old, and Hannah is twentyfive. She is very busy in church and other society work, always organist in church and giving some lessons in music, besides doing most of the dairy work. I am so glad to have her to depend on now when I am not well. Received letters from Willie, Calvin and Ida, and wrote to Ada. (T.S.R. 35. 2 P.M. 64. S.S. 56.)

Nov. 20. Sabbath. We have attended meeting and listened to a good sermon from Rev. Stewart, from the words, "Everyone that believeth in Him shall receive remission of sins." Word from Susie has come - she is better and hopes to be at home