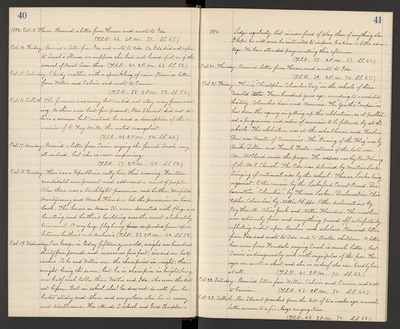 Oct. 16. Sabbath. The forenoon was rainy but we did not stay away from meeting. As there were but few present, Rev. Stewart did not deliver a sermon, but instead he read a description of the conversion of B.Fay Mills, the noted evangelist. (T.S.R. 43. 2 P.M. 54. S.S. 48.)

Oct. 18. Tuesday. There was a Republican rally here this evening. fourteen candidates were present and addressed a crowd of people. Also there was a torchlight procession, and Luther, Winfield Montgomery and Mark Flanders led the procession on horseback. The houses on Main St. were decorated with flags and bunting, and Luther's building was the most elaborately trimmed. A very large flag hung suspended from ropes between Luther's and Ambrose's. (T.S.R. 37. 2 P.M. 64. S.S. 58.)

Oct. 19. Wednesday. Our George is today fifteen years old, weighs one hundred thirty four pounds, and measures five feet, six and one-half inches. So he and Willie were the champions in weight, their weight being the same, but he is champion in height, being one-half inch taller than Willie and Ida, who were the Tallest before. But in school, alas! he does not do well, for he hates study, and there and everywhere else he is noisy and troublesome. He attends S. School and Good Templar's

1892. Lodge regularly, but is more fond of play than of anything else. I hope he will soon be interested to improve his time to better advantage. We have attended prayermeeting this afternoon. (T.S.R. 37. 2 P.M. 67. S.S. 60.)

Oct. 21. Friday. This is "Christopher Columbus Day" in the schools of these United states. Four hundred years ago, according to accredited history, Columbus discovered America. The "Youth's Companion" has been the agency in getting up this celebration, as it published a programme and order of exercises to be followed by all the schools. The celebration was at the school house and Teacher Dow was Master of Ceremonies. The "Raising of the Flag" was by Mike Dillon and Frank Foster - veterans of the late war. Mrs. McCloud made the prayer. The address was by Rev. Winning of the M.E.church. The ode was delivered by Mertice Locke. Singing of national avis by the school - Theresa Locke being organist. Other music by the Lockeford Cornet Band. Declamation- -"Columbia"- by Theresa Locke. Declamation -"Christopher Columbus", by Nettie Phipps. Other declamations by Roy Howell, Alice Jack and Nellie Flanders. The weather was extremely fine and everything passed off satisfactorily reflecting credit upon teacher and scholars. Received letter from Ida and wrote to Ada and To Boston children. A letter has come from Ferndale saying Sarah is much better, but Susie is dangerously sick with [?] of the face. Her eyes are swollen shut, and she is so deaf she can hardly hear at all. (T.S.R. 41. 2 P.M. 70. S.S. 62.)