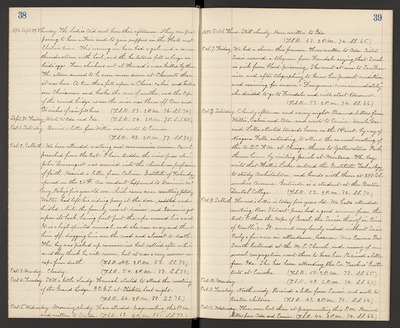 1892. Sept. 29. Thursday. the Ladies Aid met here this afternoon. They are preparing to have a Fair and to give suppers in the Hall next Election time. This evening we have had a gale and a severe thunderstorm with hail, and the hailstones fell as large as birds eggs. Four chickens out at Howard's were killed by them. The storm seemed to be even more severe at Clements than it was here. A tree there fell upon a China cabin and killed one Chinaman and broke the arm of another, and the top of the covered bridge across the river was blown off. One and 08/100 inches of rain fell here (T.S.R. 53. 2 P.M. 76. S.S. 70.)

Oct. 2. Sabbath. We have attended meeting and communion service. Rev. S. preached from the text, "I have trodden the wine-press alone". John Demangeot was received into the church on profession of faith. Received a letter from Calvin. Institute of Technology opened on the 26th. an accident happened to Quinnie Mc Gary, Riley's five year old son, which came near resulting fatally. Walter had left his riding pony at the door, saddled and bridled, while the family were at dinner, and Quinnie got upon its back, having first just the rope around his waist. It is high spirited animal, and she ran away and threw him off, dragging him over the road and almost to death. The boy was picked up unconscious but rallied after a while and they think he will recover, but it was a very narrow escape from death. (T.S.R. 49. 2 P.M. 83. S.S. 73.)

Oct. 7. Friday. We had a shower this forenoon. Have written to Ada. Sister Susie received a telegram from Ferndale saying that Sarah is sick from blood-poisoning. She went at once to San Francisco, and after telegraphing to know her present condition and receiving for answer - "Dangerous-come immediately". she decide to go to Ferndale and will start tomorrow. (T.S.R. 53. 2 P.M. 74. S.S. 66.)

Oct. 8. Saturday. Cloudy afternoon and rainy night. Received letters from Willie, Calvin and Ada, and wrote to Eunice. Uncle Geo. and Lilla started towards home on the 1st inst. by way of Niagara Falls, intending to attend the annual meeting of the A.B.C.F.M. at chicago, Thence to Yellowstone Park, thence home by visiting Josiah at Montana. The boys write that Hattie Locke entered the Institute Technology to study Architecture, and boards with them at 298 Columbus Avenue. Gertrude is a student at the Boston Dental College. (T.S.R. 52. 2 P.M. 82. S.S. 70.)

Oct. 9. Sabbath. Howard's Lottie is today five years old. We have attended meeting, Rev. Stewart preached a good sermon from the text, "O thou the Hope of Israel, the Savior there of in time of trouble". D.C. It seemed very lonely indeed without Susie. Only a few were in attendance, because Mrs. Emma Pow Smith lectured at the M.E. Church, and many of our usual congregation went there to hear her. Received a letter from Ida. She has been attending the Co. Teachers' Institute at Eureka. (T.S.R. 58. 2 P.M. 73. S.S. 65.)