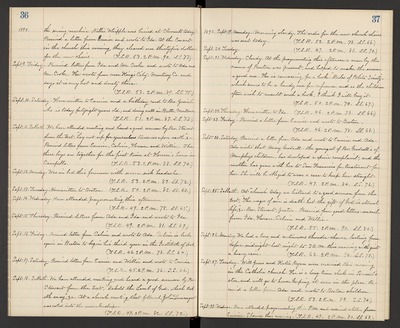 1892. The sewing machine Nellie Whipple was buried at Clements today. received a letter from Eunice and wrote to Ida. At the Concert in the church this evening they cleared our thirtyfive dollars for the new chairs. (T.S.R. 53. 2 P.M. 90. S.S. 77.)

Sept. 11. Sabbath. We have attended meeting and heard a good sermon by Rev. Stewart from the text, "Lay not up for yourselves treasures upon earth," D.C. Received letters from Eunice, Calvin, Horace and Willie. The three boys are together for the first time at Horace's home in Campello. (T.S.R. 53. 2 P.M. 88. S.S. 74.)

Sept. 21. Wednesday. Cloudy. At the prayermeeting this afternoon a man by the name of Preston was present, and helped to make the season a good one. He is canvassing for a book- "Rules of Polite Society"- which seems to be a handy one for reference, and as the children often wish to consult such a book, I think i will buy it. (T.S.R. 50. 2 P.M. 74. S.S. 67.)

Sept. 24. Saturday. Received a letter from Ada and wrote to Eunice and Ada. Ada writes that Mary Goodsell - the youngest of Rev. Goodsell's of Murphys children, has developed a spine complaint, and the mother has gone with her to San Francisco for Treatment for her. She will be obliged to wear case to keep her straight. (T.S.R. 47. 2 P.M. 84. S.S. 76.)

Sept. 27. Tuesday. Will Jones and Katie Ryan were married this morning in the Catholic Church. He is a long-time clerk in Bruml's store, and will go to house keeping at once in the place. Received a letter from Ada and wrote to Boston children. (T.S.R. 53. 2 P.M. 89. S.S. 74.)