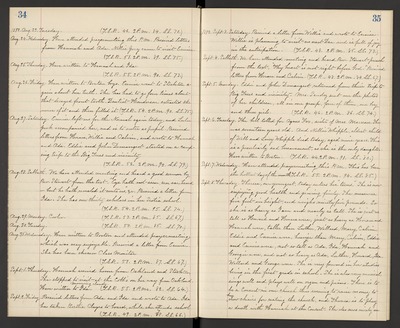 Aug. 26. Friday. Have written to Boston boys. Eunice went to Stockton again about her teeth. She has had to go four times about that decayed front tooth. Dentist Henderson extracted the nerve of it and then filled it. (T.S.R. 54. 2 P.M. 90. S.S. 75.)

Aug. 27. Saturday. Eunice left us for the Normal again today, and Lulu Jack accompanied her, and is to enter as pupil. Received letters from Horace, Willie and Calvin, and wrote to Hannah and Ada. Eddie and John Demangeot started on a camping trip to the Big Trees and vicinity. (T.S.R. 52. 2 P.M. 92. S.S. 79.)

Aug. 31. Wednesday. Have written to Boston and attended prayermeeting which was very enjoyable. received a letter from Eunice. She has been chosen Class Monitor (T.S.R. 51. 2 P.M. 87. S.S. 67.)

Sept. 6. Tuesday. The bell tolled for Agnes Fox, sister of Mrs. Marcean. She was seventeen years old. And Nellie Whipple, eldest child of Will and Lucy Whipple died today, aged nine years. This is peculiarly sad bereavement, as she is the only daughter. Have written to Boston. (T.S.R. 44. 2 P.M. 91. S.S. 80.)

Sept. 8. Thursday. Theresa, our youngest, today enters her "Teens". she is now enjoying good health and growing finely. She measures five feet in height, and weighs ninety five pounds. so she is as heavy as I am and nearly as tall. She is just as tall as Howard and Horace were, just as heavy as Horace and Hannah were, taller than Luther, Willard, Mary, Calvin, Eddie and Eunice were, heavier than Mary, Calvin, Eddie and Eunice were, not so tall as Ada, Ida, Hannah and Georgie were, and not so heavy as Ada, Luther, Howard, Ida, Willard and George were. She is very forward in her studies being in the first grade in school. She is also very musical, sings well and plays well on organ and piano. There is to be a Concert in our church this evening to raise money to buy new chairs for seating the church, and Theresa is to play a duett with Hannah at the Concert. She also sews nicely on