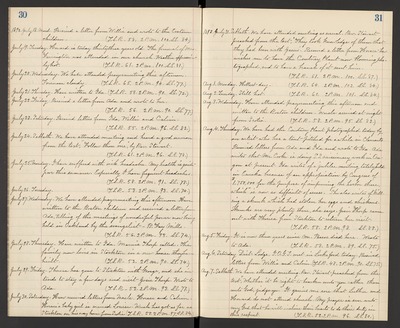 July 27. Wednesday. We have attended prayermeeting this afternoon. Have written to the Boston children and received a letter from Ada, telling of the meetings of wonderful power now being held in Oakland by the evangelist - B. Fay Mills. (T.S.R. 56. 2 P.M. 93. S.S. 74.)

1892. July 31. Sabbath. We have attended meeting as usual. Rev. Stewart preached from the text, "They took knowledge of them that they had been with Jesus." Received a letter from Horace he wishes me to have the Century Plant now blooming photographed, and to have a branch of it sent him. (T.S.R. 61. 2 P.M. 100. S.S. 87)

Aug. 4. Thurday. We have had the Century Plant photographed today by an artist who has a tent pitched for a while in Clements Received letters from Ada and Ida and wrote to Ida. Ada Writes that Mr. Cooke is doing S.S. missionary work in Oregon at present. Ida writes of a jubilee meeting lately held in Eureka because of an appropriation by Congress of $1,750,000 for the purpose of improving the harbor there which is now so difficult of access. She also writes of killing a skunk which had stolen her eggs and chickens. skunks are very plenty there, she says. Josie Thorp came out with Theresa from Stockton to return her visit. (T.S.R. 58. 2 P.M. 98. S.S. 83)

Aug. 7. Sabbath. We have attended meeting. Rev. Stewart preached from the text, "Whether it be right to hearken unto you rather than unto God, judge ye." It grieves me sore that Luther and Howard do not attend church. My prayer is ever unto my God that he will incline their hearts to do their duty in this respect. (T.S.R. 52. 2 P.M. 96. S.S. 80)