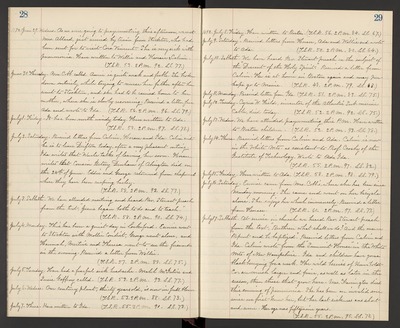 June 30. Thursday. Mrs. Cobb called. Annie is quite weak and feeble. She broke down entirely while trying to nurse her father after he went to Stockton, and she had to be carried home to her mother, where she is slowly recovering. Received a letter from Ada and wrote to Ida. (T.S.R. 56. 2 P.M. 96. S.S. 79.)

July 2. Saturday. Received letters from Calvin, Horace and Ida. Calvin writes he is to leave Drifton today, after a very pleasant outing. Ida writes that Uncle talks of leaving her soon. Horace writes that Cousin Betsey Denham of Abington died on the 24th of June. Eddie and George returned from Chaparral where they have been reaping barley. (T.S.R. 58. 2 P.M. 93. S.S. 77.)

July 4. Monday. This has been a quiet day in Lockeford. Eunice went to Stockton with Mollie Condict, George went alone, and Hannah, Mertice and Theresa went to see the fireworks in the evening. Received a letter from Willie. (T.S.R. 57. 2 P.M. 88. S.S. 75.)

July 17. Sabbath. At service in church we heard Rev. Steart preach from the text, "Brethren what shall we do?" and the answer "Repent and be baptized." Received letters from Calvin and Ida. Calvin wrote from the "Summit House" in the White Mts. of New Hampshire. Ida and children have gone black berrying for a week. The wild berries of Hamboldt Co. are much larger and finer, as well as later in the season, than those that grow here. Mrs. Farrington died this evening of pneumonia. She has been an invalid ever since we first knew her, but her last sickness was short and severe. Her age was fiftynine years. (T.S.R_55. 2 P.M. 95. S.S. 78.)