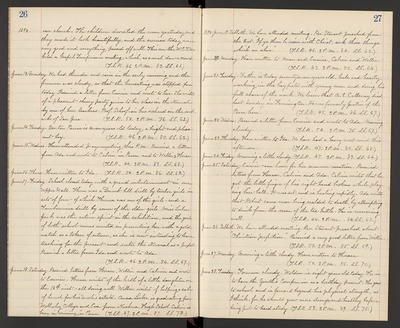 1892. our church. The children decorated the room yesterday, and they made it look beautifully, and the exercises today were very good and everything passed off well. This eve the W.C.T.W. held a Gospel Temperance meeting, which, as usual, drew a crowd. (T.S.R. 46. 2 P.M. 83. S.S. 61.)

June 13. Monday. We had thunder and rain in the early morning and the forenoon was cloudy, so that the harvesting was stopped for today. Received a letter from Eunice and wrote to her. She writes of a pleasant cherry party given to her class in the Normal by one of her teachers. Prof. Schoof- in his orchard in the suburbs of San Jose. (T.S.R. 50. 2 P.M. 76. S.S. 62.)

June 17. Friday. School closed today with a grand entertainment in our Upper Hall. There was a Dumb bell drill by twelve girls in sets of four - of which Theresa was one of the girls - and a Tambourine drill by some of the older girls. Miss Lulu Jack was the active spirit in the exhibition, and the girls of both school-rooms united in presenting her with a gold watch as a token of esteem, as she is now intending to leave teaching for the present and enter the Normal as a pupil. Received a letter from Ida and wrote to Ada. (T.S.R. 46. 2 P.M. 84. S.S. 67.)

June 18. Saturday. Received letters from Horace, Willie and Calvin and wrote to Eunice. Horace writes of the birth of a little daughter on the 12th inst. - all doing well. Willie writes of helping a sale of land for his Uncle's estate. Anna Locke is graduating from Wellesley college and Eva from Nashua High School. Calvin is busy in mining in Penn. (T.S.R. 47. 2 P.M. 87. S.S. 73.)

June 21. Tuesday. Father is today sevetyseven years old, hale and hearty, working in the hayfield with young men and doing his full share of the work. We learn that A.E. Callaway died last Sunday in Farmington. He was formerly Justice of the Peace here. (T.S.R. 45. 2 P.M. 86. S.S. 67.)

June 25. Saturday. Eunice came home for her summer vacation. Received letters from Horace, Calvin and Ada. Calvin writes that he got the little finger of his right had broken while playing base-ball. It was set, and is healing rapidly. Ada writes that Robert came near being scolded to death by attempting to drink from the nose of the tea-kettle. He is recovering well. (T.S.R. 44. 2 P.M. .84. S.S. 68.)

June 28. Tuesday. Forenoon cloudy. Weldon is eight years old today. He is to have the Youth's Companion as a birthday present. He goes to school and is forward beyond his physical strength, as I think, for he should grow more strong and healthy before being put to hard study. (T.S.R. 53. 2 P.M. 89. S.S. 75.)