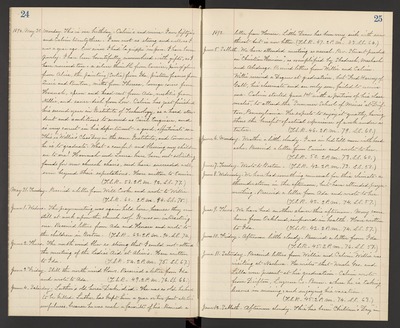 1892. May 30. Monday. This is our birthday. - Calvin's and mine- I am fiftysix and Calvin twenty three. I am not as strong and well as I was a year ago. Ever since I had "la grippe" in Jan. I have been poorly. I have been bountifully remembered with gifts, as I have received ten - a silver thimble from Eunice, pair of gloves from Alice, the painting (Scotia) from Ida, picture frames from Susie and Benton, mitts from Theresa, lounge covers from Hannah, apron and head-rest from Ada, necktie from Nellie, and sauce-dish from Lou. Calvin has just finished his second year in Institute of Technology, is a hard student and ambitious to succeed as Civil engineer, and is very correct in his department - a good, affectionate son This is Willie's Class Day in the same Institute, and tomorrow he is to graduate. What a comfort and blessing my children are to me! Hannah and Laura have been out soliciting funds for new church chairs, and have succeeded well, even beyond their expectations. Have written to Eunice. (T.S.R. 58. 2 P.M. 92. S.S. 77.)

June 1. Wednes. The prayermeeting was again held here, because they are still at work upon the church roof. It was an interesting one. Received letters from Ada and Horace and wrote to the children in Boston. (T.S.R. 62. 2 P.M. 94. S.S. 74.)

June 4. Saturday- Luther's old horse "Duke" died. He was so old he had to be killed. Luther has kept him a year or two past all his usefulness, because he was such a favorite of his. received a

June 5. Sabbath. We have attended meeting as usual. Rev. Stewart preached on "Christian Heroism", as exemplified by Shadrack, Meshack and Abednego. Received letters from Willie and Calvin. Willie received a Degree at graduation, but Fred Harvey of Galt, his classmate and an only son, failed to receive one. Calvin started June 1st with a portion of his classmates, to attend the "Summer School of Mines" At Drifton, Pennsylvania. He expects to enjoy it greatly, having thus the benefit of actual experience of work under a tutor. (T.S.R. 46. 2 P.M. 79. S.S. 60.)

June 8. Wednesday. We have had something unusual for this climate a thunderstorm in the afternoon, but have attended prayermeeting. Received a letter from Ada and wrote to her. (T.S.R. 42. 2 P.M. 74. S.S. 57.)

June 11. Saturday. Received letters from Willie and Calvin Willie was visiting at Nashua. He writes that Uncle Geo. and Lilla were present at his graduation. Calvin wrote from Drifton, Luzerne Co. - Penn. where he is taking lessons in mining, and enjoying his vacation. (T.S.R. 45. 2 P.M. 74. S.S. 63.)

June 12. Sabbath. Afternoon cloudy. This has been "Children's Day" in