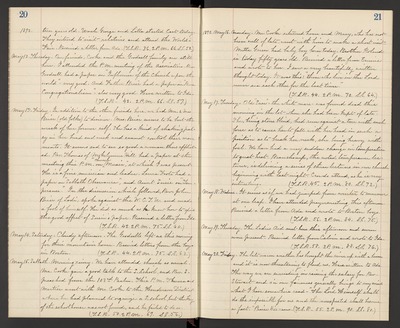 May 12. Thursday. Our friends, Cooke and the Goodsell family are still here. I attended the P.M. meeting of the Association. Rev. Goodsell had a paper on "Influence of the Church upon the World"- very good. And Father Brier had a paper on "Pine Congregationalism"- also very good. Have written to Ida. (T.S.R. 42. 2 P.M. 66. S.S. 57.)

May 13. Friday. In additon to the other friends here, we had Mr. & Mrs Brier (old folks) to dinner. Mrs. Brier seems to be but the wreck of her former self. She has a kind of shaking palsy in her head and neck and cannot control their movements. It seems sad to see so good a woman thus afflicted. Rev. Thomas of Mokelumne Hill had a paper at the meeting this P.M. on "church Music," at which I was present. He is a fine musician and leader. Laura Foote had a paper on "Sabbath Observance," and Aunt Susie on "Temperance." In the discussion which followed, Rev. John Brier of Lodi, spoke against the W.C.T.W. and made a fool of himself. he did as much as he knew hot to epic the good effect of Susie's paper. Receieved a letter from Ida. (T.S.R. 42. 2 P.M. 75. S.S. 60.)

May 15. Sabbath. Morning rainy. We have attended church as usual. Mr. Cooke gave a good talk to the S.School, and Rev. S. preached from the 103rd Psalm. This P.M. Theresa and Mertice went with Mr. Cooke to the Henderson District where he had planned to organize a S.School, but strikey of the school house was not found, and he failed to do so. (T.S.R. 50. 2 P.M. 69. S.S. 56.)

1892. May 16. Monday. Mr. Cooke returned home and Mary, who has not been well of late, went with him to make a short visit. Metta Green had baby boy born today. Brother Roland is today fifty years old. Received a letter from Eunice and wrote to her. I saw a very beautifully written thought today. It was this: "those who live in the Lord never see each other for the last time." (T.S.R. 44. 2 P.M. 70. S.S. 64.)

May 17. Tuesday. Old "Suse"- the white mare - was found dead this morning in the lot where she had been kept of late. She, being stone blind, had run against a tree with such force as to cause her to fall with her head in such a position as to break her neck, she being heavy with foal. We have had a very sudden change in temperature to great heat. Beauchamp, the noted temperance lecturer, is delivering a series of three lectures in our church beginning with last night. Crowds attend, as he is very interesting. (T.S.R. 45. 2 P.M. 80. S.S. 72.)

May 20. Friday. The late warm weather has brought the river up with a boom and it is now threatening to flood us. Have written to Ada. The way we are succeeding in raising the salary for Rev. Stewart and in our finances generally brings to my mind what I have somewhere read - "The Lord Himself shall do the impossible for us and the unexpected shall become a fact." Praise His name. (T.S.R. 55. 2 P.M. 90. S.S. 80.)