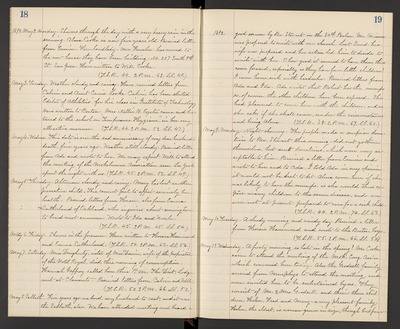 May 3. Tuesday. Weather cloudy and rainy. Have received letters from Calvin and Aunt Carrie Locke. Calvin has been elected "Editor of Athletics" for his class in Institute of Technology Have written to Boston. Mrs. Nellie B. Eyester came and lectured to the school on "Temperance Hygiene", in her very attractive manner. (T.S.R. 44. 2 P.M. 52. S.S. 47.)

May 4. Wednes. This date is ever the sad annniversary of my dear husband's death, five years ago. Weather still cloudy. Received letter from Ada and wrote to her. We may expect Will to attend the meeting of the Mokelumne Association soon. Lu Jack spent the night with us. (T.S.R. 45. 2 P.M. 52. S.S. 49.)

May 5. Thursday. Afternoon cloudy and rainy. Mary has lost another premature child. This cannot fail to affect seriously her health. Received letters from Horace, also from Emma Sutherland of Oakland, who inquires about coming here to board next summer. Wrote to Ida and Uncle. (T.S.R. 45. 2 P.M. 65. S.S. 54.)

May 7. Saturday. Miss Dougherty, sister of Mrs. Deerin, wife of the proprietor of the Hotel Royal, died this morning of consumption. Hannah Geffroy called here this P.M. The Dist. Lodge met at Clements. Received letters from Calvin and Willie. (T.S.R. 50. 2 P.M. 66. S.S. 53.)

May. 8. Sabbath. Five years ago we laid my husband to rest, and it was the Sabbath, also. We have attended meeting and heard a

1892. good sermon by Rev. Stewart on the 84th Psalm. Mr. Minner was proposed to unite with our church. Last Sund. his wife was proposed and her action led him to decide to unite with her. O how good it seemed to have them thus come forward, especially as they have four little children! I came home sick with headache. Received letters from Ada and Ida. Ada writes that Robert has the mumps so, of course, the other children have been exposed. She had planned to come here with the children, and so she asks if she shall come, under the circumstances and bring Alma. (T.S.R. 38. 2 P.M. 67. S.S. 60.)

May 9. Monday. Night showery. the people made a surprise donation to Rev. Stewart this evening - did not go there themselves, but sent donations, which were very acceptable to him. Received a letter from Eunice and wrote to her and to Ada. I told Ada in any opinion it would not be best to let Alma come here if she was likely to have the mumps, as she would thus expose many children to the same disease, and we were not at present prepared to care for a sick child. (T.S.R. 44. 2 P.M. 74. S.S. 63.)

May 11. Wednesday. A frosty morning so late in the spring! Mr. Cooke came to attend the meeting of the Mok. Cong. Ass'n which convened here today. Also the Goodsell family arrived from Murphys to attend the meeting, and were invited here to be entertained by us. They consist of Mr. & Mrs. Goodsell and their children, Helen, Fred and Mary - a very pleasant family. Helen, the eldest, is woman-grown in size, though but fourteen