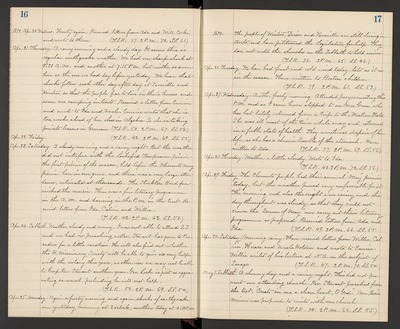 Apr. 21. Thursday. A rainy morning and a cloudy day. It seems this is regular earthquake weather. We had one sharp shock at 9:30 A.M. and another at 7:15 P.M. but neither as severe here as the one we had day before yesterday. We hear that shocks follow each other day after day at Vacaville and Winters, so that the people fear to live in their houses and some are camping in tents. Received a letter from Eunice and wrote to Ida and Uncle. Eunice writes that she is ten weeks ahead of her class in Algebra. So she is taking private lessons in German. (T.S.R. 50. 2 P.M. 67. S.S. 58.)

Apr. 23. Saturday. A cloudy morning and a rainy night. but the Weather did not interfere with the Lockeford Temperance picnic. the first picnic of the season, held before the Clements may picnic, here in our grove, and there was a very large attendance, estimated at thousands. The Stockton Bank finished the music. There was a fine literary programme in the A.M. and dancing in the P.M. in the tent. Received letters from Ida, Calvin and Willie. (T.S.R. 42. 2 P.M. 63. S.S. 58.)

Apr. 24. Sabbath. Weather cloudy and rainy. I was not able to attend S.S. and we had no preaching as Rev. Stewart has gone to Pescadero for a little vacation. He will also find out whether the H. Missionary Society will be able to give us any help with the salary this year, as otherwise we may not be able to keep Rev. Stewart another year. Geo. Locke is just as aggravating as usual, pretending he will not help. (T.S.R. 50. 2 P.M. 69. S.S. 54.)

Apr. 25. Monday. Again a frosty morning and again shocks of earthquake one yesterday morning at 2 o'clock, another today at 4:30 P.M.

Apr. 27. Wednesday. Another frosty morning. Attended prayer meeting this P.M. and as I came home stopped to see Mrs. Green, who has but lately returned from a trip to the Western States. she was ill most of the time while away and returned in a feeble state of health. they sometimes despair of her life, as she has chronic trouble of the stomack. Have written to Ada. (T.S.R. 37. 2 P.M. 69. S.S. 58.)

Apr. 29. Friday. The Clements people had their annual "May" picnic today, but the weather proved very unfavorable for it. The morning and also the night were rainy, and the day throughout was cloudy, so that they could not crown the "Queen of May" nor carry out their literary programme as prepared. Received letters from Ada and Ida. (T.S.R. 49. 2 P.M. 66. S.S. 55.)