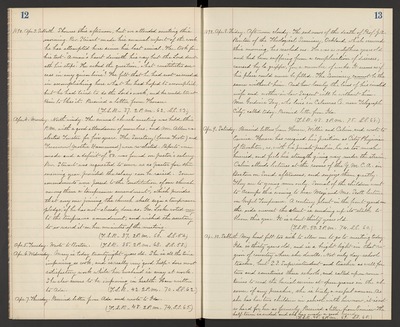 1892. Apr. 3. Sabbath. Showers this afternoon, but we attended meeting this morning. Rev. Stewart made his annual report of the work he has attempted here since his last arrival. He took for his text - "A man's heart deviseth his way but the Lord [?] his steps." He asked the question, "what constitutes success in any given line?" he felt that he had not succeeded in accomplishing here what he had hoped to accomplish, but he had tried to do the Lord's work, and he could trust Him to bless it. Received a letter from Horace. (T.S.R. 37. 2 P.M. 62. S.S. 53.)

Apr. 4. Monday. North windy. The annual church meeting was held this P.M. with a good attendance of members, and Mr. Allen was elected Trustee for five years. The Secretary (Laura Foote) and Treasurer (Mother Hammond) were re-elected. Reports were made and a deficit of $50. was found on pastor's salary. Rev. Stewart was requested to serve us as pastor for the ensuing year, provided the salary can be raised. Some amendments were passed to the Constitution of our church, among them a "temperance amendment", which provides that anyone joining the church shall sign a temperance pledge, if he has not already done so. Geo. Locke voted nay to the temperance amendment, and wished the secretary to so record it on her minutes of the meeting. (T.S.R. 37. 2 P.M. 60. S.S. 54.)

Apr. 6. Wednesday. Mary is today twenty eight years old. She is all the time improving as cook, and is really very good help- does most satisfactory work while her husband is away at work. she also seems to be improving in health. Have written to Ada. (T.S.R. 42. 2 P.M. 70. S.S. 62.)

1892. Apr. 8. Friday. Afternoon cloudy. The sad news of the death of Prof. J.A. Benton of the Theological Seminary, Oakland, which occurred this morning, has reached us. He was seventythree years old and had been suffering from a complication of diseases, caused by la grippe, for a number of weeks. It seems as if his place could never be filled. The Seminary cannot be the same without him. And how lonely the lives of his invalid wife and mother-in-law-Sergent will be without him. Mrs. Gardiner Day, who lives in Calaveras Co. near Telegraph City, called today. Received letter from Ida. (T.S.R. 48. 2 P.M. 75. S.S. 68.)

Apr.9. Saturday. Received letters from Horace, Willie and Calvin, and wrote to Eunice. Horace has resigned his position as City Physician of Brockton, as, with his private practice, he is too much hurried, and feels his strength giving way under the strain. Calvin attends lectures at the rooms of the Y.M.C.A. in Boston on Sund. Afternoons, and enjoys them greatly. They are to young men only. Several of the children went to Acampo this evening to hear Maj. and Mrs. Scott lecture on Gospel Temperance. A century plant in the front yard on the side nearest the street is sending up its stalk to bloom this year. It is about thirty years old. (T.S.R. 50. 2 P.M. 74. S.S. 60.)

Apr. 10. Sabbath. My head felt too sick to allow me to go to meeting today. Ida is thirty years old, and is a bright light in that region of country where she dwells. Not only day-school teacher, but S.S. Superintendent and teacher as well for two and sometimes three schools, and called upon sometimes to read the burial service at open graves in the absence of any preacher, she is truly a useful woman. As she has her two children in school with her now, it is not so hard for her as formerly. Received a letter from Eunice. The half-term is ended and she has made a good record. (T.S.R. 45. 2 P.M. 69. S.S. 65.)