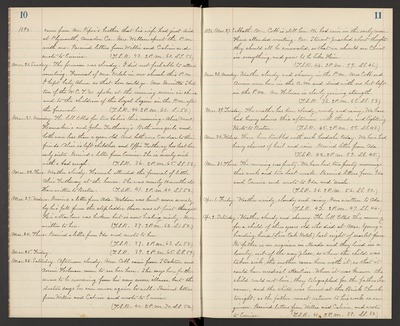 Mar. 20. Sunday. The forenoon was cloudy. I did not feel able to attend meeting. Funeral of Mrs. Welch in our church this P.M. I kept baby Alma so that Lou could go. Mrs. Henrietta Skelton of the W.C.T.W. spoke at the morning service in church and to the children of the Loyal Legion in the P.M. after the funeral. (T.S.R. 44. 2 P.M. 60. S.S. 50.)

Mar. 21. Monday. The bell tolled for two babies this morning. Alice (Mont.) Hamaker's and John Tretheway's. Both were girls and both were less than a year old. And both were O so dear to their friends. Alice is left childless and Effie Tretheway has lost her only sister. Received a letter from Eunice. She is nearly sick with a bad cough. (T.S.R. 36. 2 P.M. 65. S.S. 56.)

Mar. 23. Wednes. Received a letter from Ada. Weldon was hurt more severely by his fall from the stepladder than was at first thought. His collarbone was broken but is now healing nicely. Have written to her. (T.S.R. 37. 2 P.M. 62. S.S. 50.)

Mar. 26. Saturday. Afternoon cloudy. Mrs. Cobb came from Stockton and Annie Holman came to see her here. She says her father seems to be recovering from his very severe illness, but the doctor says he can never again be well. Received letters from Willie and Calvin and wrote to Eunice. (T.S.R. 40. 2 P.M. 70. S.S. 54.)

Apr. 2. Saturday. Weather cloudy and Showery. The bell tolled this morning for a child of three years old who died at Mrs. Young's boarding house (Live-Oak Hotel) last night of scarlet fever. Its father is an engineer in Nevada and they lived in a lonely, out-of-the-way place, so when the child was taken sick, the mother came here with it, so that it could have medical attention. When it was known the child could not live, they telegraphed for the father; he came, and the child was buried at the Brick Church tonight, as the father must return to his work as engineer. Received letters from Willie and Calvin, and wrote to Eunice. (T.S.R. 41. 2 P.M. 58. S.S. 50.)