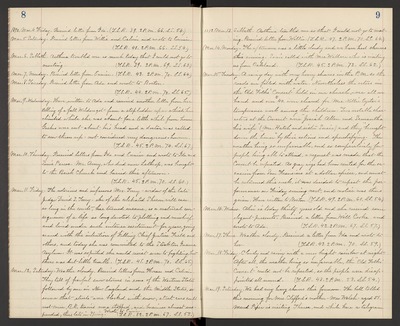 Mar. 9. Wednesday. Have written to Ada and received another letter from her telling of a fall Weldon got from a stepladder upon which he climbed while she was absent for a little while from home. Gashes were cut about his head and a doctor was called to sew them up not considered very dangerous. however. (T.S.R. 45. 2 P.M. 74. S.S. 67.)

Mar. 11. Friday. The notorious and infamous Mrs. Terry - widow of the late Judge David S. Terry - she of the celebrated Sharon will case, so long in the courts, has turned insane, as a natural consequence of a life so long devoted to plotting and mischief, and lived under such intense excitement for years, going armed with the intention of killing Chief Justice Field and others, and today she was committed to the Stockton Insane Asylum. It was expected she would resist even to fighting, but there was but little trouble. (T.S.R. 41. 2 P.M. 70. S.S. 65.)

Mar. 12. Saturday. Weather cloudy. Received letters from Horace and Calvin. They tell of fearful snow storms in some of the Western States followed by one in New England and the Middle States, so severe that streets were blocked with snow, street cars could not run, R.R. trains were stopped, and business almost suspended, thus late in Spring. Wrote to Eunice. (T.S.R. 52. 2 P.M. 67. S.S. 58.)

Mar. 15. Tuesday. A rainy day with very heavy showers in the P.M. so the roads are filled with water. Nevertheless the actors in the "Old Folks' Concert" held in our church, were all on had and over $40. were cleared for Mrs. Nellie Eyster's temperance work among the children. Two notable characters at the Concert were "Josiah Allen and Samantha his wife" (Mr.Hatch and sister Susie) and they "brought down the house" by their actions and speechifying. The weather being so unfavorable, and so comparatively few people being able to attend, a request was made that the concert be repeated. As gray wigs had been rented for the occasion from San Francisco at a dollar apiece, and must be returned this week, it was decided to repeat the performance on Friday evening next, and notice was thus given. Have written to Boston. (T.S.R. 49. 2 P.M. 60. S.S. 54.)

Mar. 19. Saturday. We had very heavy showers this forenoon. The bell tolled this morning for Mrs. Clifford's mother. Mrs. Welch - aged 51. Maud Piper is visiting Theresa, and while here a telegram