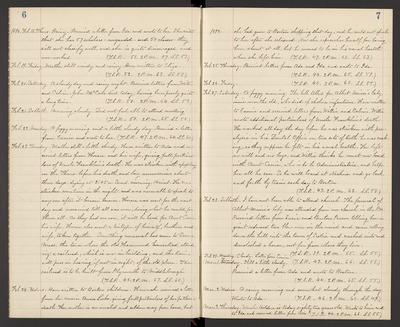 Feb. 23. Tuesday. Weather still a little cloudy. Have written to Ada and received letters from Horace and his wife, giving full particulars of Uncle Franklin's death. He was stricken with apoplexy on the Thurs. before his death, and lay unconscious about three days, dying at 2:45 on Sund. morning, 14inst. He was stricken sometime in the night, and was never able to speak to any one after it became known. Horace was sent for the next day and remained till all was over, doing what he could for them all. As they had no son, it will be hard for Aunt Carrie, his wife. Horace also sent a tintype of himself, brothers and wife, taken together. Something unusual has come to carver, Mass. the town where the old Hammond homestead stands, viz: a railroad, which is now in building, and the trains will pass in hearing, if not in sight, of the old place. The railroad is to be built from Plymouth to Middleborough. (T.S.R. 42. 2 P.M. 67. S.S. 60.)

Feb. 24. Wednes. Have written to Boston Children. Hannah received a letter from her cousin Anna Locke, giving full particulars of her father's death. Her mother is an invalid and seldom away from home, but

Feb. 27. Saturday. A foggy morning. The bell tolled for Albert Miner's baby, nine months old, who died of cholera infantum. Have written to Eunice and Received letters from Willie and Calvin. Willie wrote additional particulars of Uncle Franklin's death. He worked all day the day before he was stricken with paralysis in his Dental Office on Two sets of teeth he was making, so they suppose he felt in his usual health. He left no will and no boys, and Willie thinks he must now board with Aunt Carrie, who is to be Administratrix, and help her all he can. So he will board at Nashua and go back and forth by train each day to Boston. (T.S.R. 43. 2 P.M. 62. S.S. 58.)

Feb. 28. Sabbath. I have not been able to attend church. The funeral of Albert Miner's baby was attended from our church in the P.M. Received letters from Susie and Benton Pascoe telling how a giant redwood tree blew over in the wind and came rolling down the hill into the town of Scotia and crashed into and demolished a house, not far from where they live. (T.S.R. 39. 2 P.M. 65. S.S. 55.)