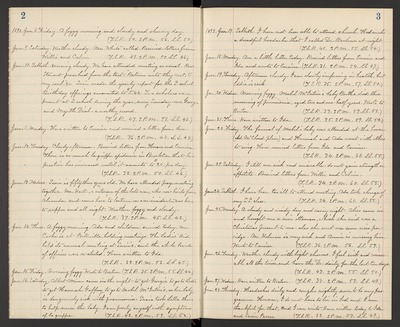 Jan. 10. Sabbath. Morning cloudy. We have attended meeting as usual. Rev. Stewart preached from the text, "Return unto thy rest, O my soul," [?] Susie made the yearly report for the S. school. Birthday offerings amounted to $5.42. Two scholars were present at S. school during the year, every Sunday our George Myrtle Dial - a worthly record. (T.S.R. 47. 2 P.M. 51. S.S. 48.)

Jan. 13. Wednes. Susie is fifty three years old. We have attended prayer meeting together. Mr. Hartt, a veteran of the late war, who now hails from Alameda, and comes here to lecture on war incidents, was here to supper and all night. Weather foggy and cloudy. (T.S.R. 37. 2 P.M. 45. S.S. 42.)

Jan. 16. Saturday. Albert Miner came in the night to get Georgie to go to Lodi to get Hannah Geffroy to go to Mabel McIntire's, as her baby is dangerously sick with pneumonia. Susie took Lilla there to help nurse the baby. I am poorly myself with symptoms of la grippe. (T.S.R. 43. 2 P.M. 53. S.S. 52.)