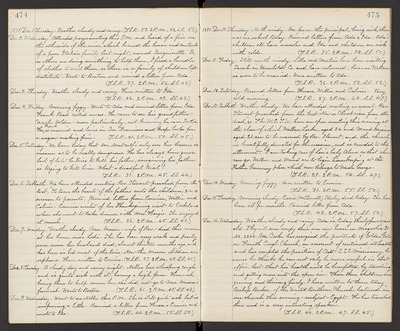 Dec. 2. Wednesday. Attended prayer meeting this P.M. and heard of a fire on the otherside of the river, which burned the house and contents of a poor Italian family last night, named Sanguinetti. So, as others are doing something to help them, I fixed a bundle of clothes to send them, as there is a family of children left destitute. Wrote to Boston and received a letter from Ada. (T.S.R. 37. 2 P.M. 56. S.S. 48.)

Dec. 4. Friday. Morning foggy. Wrote to Ada and received letter from Ida. Frank Read called on us. He came to see his grandfather - Uncle Holden - more particularly, not knowing he is in Scotia. He Frank is married and lives in San Francisco and keeps books for a wagon making firm. (T.S.R. 41. 2 P.M. 50. S.S. 45.)

Dec. 5. Saturday. We learn today that Mr. Metcalf's only son has become so insane as to be really dangerous. He has always been queer but of late he tries to kill his father, imagining his father is trying to kill him. What a dreadful trial! (T.S.R. 31. 2 P.M. 45. S.S. 44.)

Dec. 6. Sabbath. We have attended meeting. Rev. Stewart preached from the text, "To turn the hearts of the fathers unto the children," &.c. a sermon to parents. Received letters from Eunice, Willie and Calvin. Eunice writes of her Thanksgiving visit to Oakland where she went to take dinner with Mrs. Haye's. She enjoyed it much. (T.S.R. 26. 2 P.M. 45. S.S. 41.)

Dec. 7. Monday. Weather cloudy. Mrs. Mason - wife of Rev. - died this morn at her home near Lodi. She has been very weak and poorly ever since her husband died, almost thirteen months ago, and has been in bed most of the time. Now the Mason children are orphans. Have written to Eunice. (T.S.R. 27. 2 P.M. 48. S.S. 41.)

Dec. 13. Sabbath. Weather cloudy. We have attended meeting as usual. Rev. Stewart preached from the text, "Now is Christ risen from the dead," &c The W.C.T.U. have an open meeting this evening, at the close of which Wallace Locke, aged 24 and Maude Misner aged 21, are to be married by Rev. Stewart, and the church is beautifully decorated for the occasion, and is crowded to the uttermost. I am taking care of Lou's baby Alma so that she can go. Wallace and Maud are to begin housekeeping at the Father Guernsey place, which now belongs to Uncle George. (T.S.R. 29. 2 P.M. 54. S.S. 47.)

Dec. 16. Wednesday. Weather cloudy and rainy. Ada is today thirtyfour years old. They will soon occupy their own new house on Magnolia St. No. 2244. Mr. Cooke has resigned the pastorate of Golden Gate or Fourth Congl. Church, on account of continued ill health and has accepted the position of Asst. S.S.S. Missionary, because he thinks he can not only be more useful in that office, but that his health will be benefitted by traveling and getting more into the open air. Their three children are growing and thriving finely. I have written to them today. Bishop Becker, of the United Brethren Church, lectured in our church this evening - subject - Egypt. He has traveled there and is a very interesting speaker. (T.S.R. 44. 2 P.M. 47. S.S. 45.)