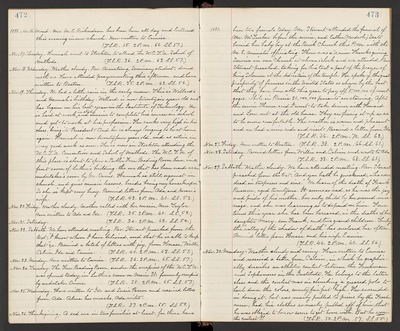 Nov. 19. Thursday. We had a little rain in the early morn. This is Willard's and Hannah's birthday. Willard is now twentysix years old and has begun on his last year in the Institute of Technology. He is hard at work in study and anxious to complete his course in school and get to work at his profession. He ranks very high in his class, being its President. And he is always longing to be at home again. Hannah is now twentyfour years old, and as active in every good work as ever. She is now in Stockton attending the W.C.T.U. Convention and School of Methods. The W.C.T.U. of this place is about to open a Public Free Reading Room here, in a front room of Luther's building - the one that has been used as an undertaker's room by Geo. Owens. Hannah is still organist in church, and gives music lessons, besides being my housekeeper. So she is kept very busy. Received letters from Ada and Horace's wife. (T.S.R. 43. 2 P.M. 60. S.S. 53.)

Nov. 26. Thanksgiving. A sad one in two families at least, for there have

1891. been two funerals today. Mr. Stewart attended the funeral of Mr. McTucker before the service, and Esther (Wardrobe) Seats buried her baby boy at the Brick Church this P.M. with the M. E. Minister officiating. There was a Union Thanksgiving Service in our Church at eleven o'clock and we attended. Rev. Stewart preached, taking for his text a part of the prayer of king Solomon at the dedication of the temple. He spoke of the great prosperity of farmers in the United States as shown by the fact that they have been able this year to pay off $5,000,000 of mortgages, while in Russia 20,000,000 peasants are starving. After the service Theresa and I went to take dinner with Howard and Lou, out at the old house. They are fixing it up so as to be more comfortable. The weather is warm and pleasant and we had a nice ride and visit. Received a letter from Ida. (T.S.R. 36. 2 P.M. 70. S.S. 62.)

Nov. 29. Sabbath. Weather cloudy. We have attended meeting. Rev. Stewart preached from the text, "And you hath he quickened, who were dead in trespasses and sins". We learn of the death of Frank Russem, aged twentyone. It seems so sad, as he was the joy and pride of his mother, her only child by her second marriage, and she was learning so to depend on him. Four times this year she has been bereaved, in the deaths of her daughter Mary, son Frank, and two grand-children. Truly the "valley of the shadow of death" has enclosed her often. Received letters from Horace and his wife Eunice. (T.S.R. 44. 2 P.M. 60. S.S. 54.)

Nov. 30. Monday. Weather cloudy and rainy. Have written to Eunice and received a letter from Calvin, in which he graphically describes an athletic contest between the Freshman and Sophomores in the Institute. He belongs to the latter class, and the contest was in climbing a greased pole to haul down the colors, seventyfive feet high. He succeeded in doing it, but was nearly pulled to pieces by the Freshmen, had his clothes so nearly pulled off of him, that he was obliged to borrow some to get home with. But he won the contest!! (T.S.R. 50. 2 P.M. 57. S.S. 55.)