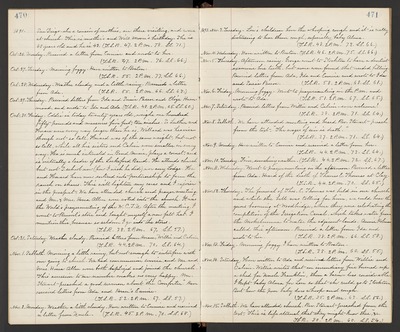 Oct. 30. Friday. Eddie is today twenty years old, weighs one hundred fifty pounds and measures five feet, ten inches. So Luther and Horace were every way larger than he is. Willard was heavier though not so tall, Howard was of the same weight, but not so tall, while all his sisters and Calvin were smaller in every way. He is much interested in Band Music, plays a cornet, and is virtually a leader of the Lockeford Band. He attends church but not S. school now (how I wish he did) nor any Lodge. He and Howard have now entered into partnership to farm the ranch on shares. This will lighten my cares and I rejoice in the prospect. We have attended church and prayer meeting, and Mr. & Mrs. Hosea Allen were voted into the church. It was the World's prayer meeting of the W.C.T.U. After the meeting. I went to Bruml's store and bought myself a now felt hat. I mention this, because so seldom I go into the stores. (T.S.R. 38. 2 P.M. 67. S.S. 57.)

Nov. 1. Sabbath. Morning a little rainy, but not enough to interfere with our going to church. We had communion service, and Mr. and Mrs. Hosea Allen were both baptized and joined the church. This accession to our number makes us very happy. Mr. Stewart preached a good sermon about "the Comforter." Have received letters from Ada and Horace's Eunice. (T.S.R. 52. 2 P.M. 67. S.S. 57.)

Nov. 5. Thursday. Afternoon rainy. George went to Stockton to have a dentist examine his teeth, but none were found that needed filling. Received letters from Ada, Ida and Eunice and wrote to Ida and Susie Pascoe. (T.S.R. 58. 2 P.M. 68. S.S. 61.)

Nov. 12. Thursday. The funeral of Thos. E. Thomas was held in our church and while the bell was tolling for him, we could hear the guns booming at Woodbridge, where they were celebrating the completion of the Irrigation Canal, which takes water from the Mokelumne to water the adjacent lands. Annie Holman called this afternoon. Received a letter from Ida and wrote to her. (T.S.R. 38. 2 P.M. 66. S.S. 58.)

Nov. 14. Saturday. Have written to Ada and received letters from Willie and Calvin. Willie writes that an incendiary fire burned up a shed for Uncle Franklin, then a barn - loss considerable. I kept baby Alma for Lou so that she could go to Stockton. But how the poor baby does whoop and cough. (T.S.R. 35. 2 P.M. 63. S.S. 56.)