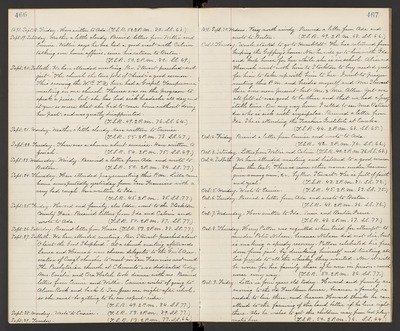 Sept. 19. Saturday. Weather a little cloudy. Received letters from Willie and Eunice. Willie says he has had a good visit with Calvin talking over home affairs, since his return to Boston. (T.S.R. 50. 2 P.M. 80. S.S. 69.)

Sept. 20. Sabbath. We have attended meeting. Rev. Stewart preached - subject - "The church the true fold of Christ" - a good sermon. This evening the W.C.T.U. have had a Gospel Temperance meeting in our church. Theresa was on the program to speak a piece, but she has had sick headache all day and it grew so severe that she had to come home without doing her part, and was greatly disappointed. (T.S.R. 49. 2 P.M. 76. S.S. 64.)

Sept. 27. Sabbath. We have attended meeting. Rev. Stewart preached about "Christ, the Good Shepherd." At a church meeting afterwards Laura and Hannah were chosen delegates to the Gen'l Association of Cong'l churches to meet in San Francisco next month. The Presbyterian church at Clements was dedicated today. Mrs. Emelie and Ora Hatch took dinner with us. Received letters from Eunice and Willie. Eunice writes of going to Alum Rock and back to San Jose one night after school, so she must be getting to be an expert rider. (T.S.R. 49. 2 P.M. 84. S.S. 77.)

Oct. 1. Thursday. Uncle started to go to Humboldt. He has returned from keeping the Geffroy's house. Now he will go to live with Ida and keep house for her while she is in school. Alice and Hannah went with him to Stockton to buy needed goods for him to take up with him to her. I went to prayer meeting this P.M. and besides myself and Mr. Stewart there were none present but Mr. & Mrs. Allen. Yet we all felt it was good to be there and that we had a profitable time. On my way home I called to see Mrs. Ostrander who is sick with erysipelas. Received a letter from Ida. She is attending the Teacher's Institute at Eureka. (T.S.R. 44. 2 P.M. 68. S.S. 65.)

Oct. 8. Thursday. Harry Patton was acquitted when tried for attempt to murder Peter Nelson, because Nelson did not die, but is making a speedy recovery. Patton celebrated his freedom from jail, by drinking himself and treating all his friends to all the whisky they wanted. Now it will be worse for his family than if he were in prison - march worse every way. (T.S.R. 50. 2 P.M. 86. S.S. 77.)

Oct. 9. Friday. Lottie is four years old today. Howard and family are moving to the old Faulkner house, because a family is needed to live there, and because Howard thinks he can attend to the farming of the land better if he lives right there. Also he wishes to get the children away from bad playmates here. (T.S.R. 50. 2 P.M. 76. S.S. 64.)