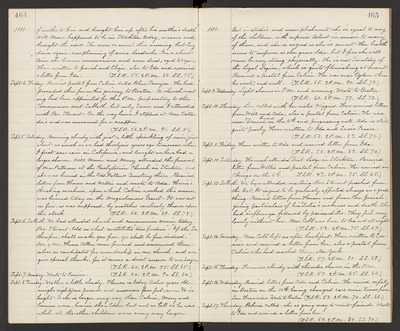 1891. of mother to him and brought him up after his mother's death. Will Moore happed to be in Stockton today, so came and brought the news. She arose as usual this morning, but lay down again, complaining of severe headache. In a short time she became unconscious, and soon died, aged 60 years. Have written to Josiah and Eliza, also to Ida and received a letter from Ida. (T.S.R. 55. 2 P.M. 88. S.S. 75.)

Sept. 4. Friday. Received postal from Calvin, dated Blue Canyon. He had proceeded thus for on his journey to Boston. A church meeting had been appointed for this P.M. preparatory to the Communion next Sabbath, but only Susie and I attended with Rev. Stewart. On the way home, I stopped at Mrs. Ostrander's and was measured for a wrapper. (T.S.R. 56. 2 P.M. 91. S.S. 81.)

Sept. 5. Saturday. Morning cloudy with just a little sprinkling of rain, just about as much as we had thirty six years ago tomorrow, when I first saw rain in California, and tonight we have had a larger shower. Will Moore and Mary attended the funeral of Mrs. Patterson at the Presbyterian Church in Stockton and she was buried in the Odd Fellows Cemetery there. Received letters from Horace and Willie and wrote to Ada. Harris's threshing machine, upon which Calvin worked this season, was burned today on the Moquelomous Grant. It was set on fire, as was supposed, by matches carelessly thrown upon the stack. (T.S.R. 64. 2 P.M. 88. S.S. 78.)

Sept. 6. Sabbath. We had attended church and communion service today. Rev. Stewart told us what constitutes "true freedom" - "If the Son therefore, shall make you free, ye shall be free indeed." Mr. & Mrs. Hosea Allen came forward and announced themselves as candidates for membership in our church, and we give special thanks, for it seems a direct answer to our prayers. (T.S.R. 60. 2 P.M. 95. S.S. 85.)

Sept. 8. Tuesday. Weather a little cloudy. Theresa is today twelve years old, weighs eightyone pounds and measures four feet, seven 3/4 in. height. So she is larger every way than Calvin, Mary and Eunice were, heavier than Eddie but not as tall as he was, while all the other children were every way larger.

1891. But in studies and accomplishments she is equal to any of the children, with superior talent in music to may of them, and she is as good as she is smart. Her health seems to improve as she grows older, but I fear she will never be very strong physically. She is now Secretary of the Loyal Legion, which is quite flourishing at present. Received a postal from Calvin. He was near Ogden when he wrote, and well. (T.S.R. 65. 2 P.M. 90. S.S. 77.)

Sept. 10. Thursday. Lou called with her sister Wiggins. Have received letters from Will and Ada, also a postal from Calvin. He was near Denver beyond on the 6th and progressing well, Ada is still quite poorly. Have written to Ida and Susie Pascoe. (T.S.R. 58. 2 P.M. 83. S.S. 72.)

Sept. 13. Sabbath. We have attended meeting. Rev. Stewart preached from the text, "It is good to be zealously affected always in a good thing. Received letters from Horace and from Bro. Josiah, giving particulars of his Delia's sickness and death. She had influenza followed by pericarditis. They feel very lonely without her. Mrs. Cobb was here to tea and all night (T.S.R. 52. 2 P.M. 75. S.S. 67.)