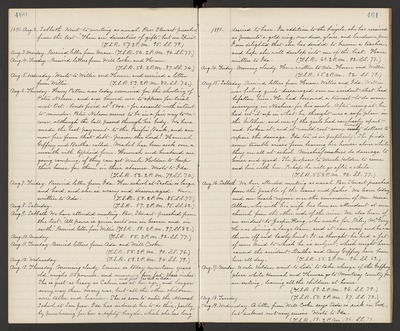 Aug. 6. Thursday. Harry Patton was today examined for the shooting of Peter Nelson, and was bound over to appear for trial next Oct. - bonds fixed at $5000. - for assault with intent to murder. Peter Nelson seems to be in a fair way to recover, although the ball passed through his body. We have made the last payment to the Pacific Bank, and are now free from that debt, praise the Lord! Hannah Geffroy and Bertha called. Mabel has been sick over a month with typhoid fever. Hannah and husband are going camping, if they can get Uncle Holden to keep their house for them in their absence. Wrote to Ida. (T.S.R. 52. 2 P.M. 79. S.S. 70.)

Aug. 13. Thursday. Morning cloudy. Eunice is today seventeen years old, weighs 113 pounds, and measures five feet, three inches. She is just as heavy as Calvin was at her age and just as tall as Ada, and larger every way than Mary was, but all the other children were taller and heavier. She is soon to enter the Normal School at San Jose. Ida has induced her to do this, partly by purchasing for her a safety bicycle, which she has long

Aug. 15. Saturday. Received letters from Horace, Willie and Ida. Willie was feeling quite discouraged over an accident that had befallen him. He had borrowed a transit to do some surveying in Nashua for his uncle. After using it, he had set it up in what he thought was a safe place in the kitchen, and one of the girls had carelessly upset and broken it, and it would cost some twenty dollars to repair the damage. Ida too, is in perflexity. She finds some trouble arises from leaving her house alone while they are all at school. Mischief makers do damage to house and yard. She proposes to Uncle Holden to come and live with her. Perhaps he will go after a while. (T.S.R. 55. 2 P.M. 92. S.S. 77.)

Aug. 16. Sabbath. We have attended meeting as usual. Rev. Stewart preached from the "parable of the loaves and fishes". We learn today and our hearts rejoice over the conversion of Mr. Hosea Allen, who with his wife has been an attendant at our church from the other side of the river. We also hear of an accident to Jasper King, who makes for Riley McGary. He was driving a large team, and it ran away and he was thrown off and badly hurt. It is thought he had a fit of some kind to which he is subject, which might have caused the accident. Bertha and Amy Gefrroy have been here all day. (T.S.R. 55. 2 P.M. 96. S.S. 83.)