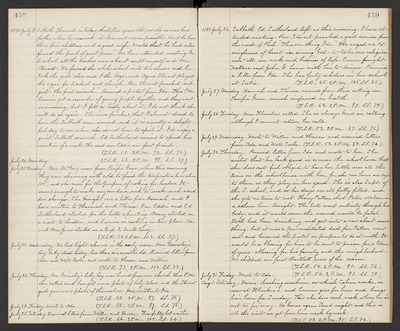 1891. July 19. Sabbath. Howard is today thirtytwo years old, as old as was his father when he married - it does not seem possible. And he has three fine children and a good wife. Would that he had also found the "pearl of great price". We have attended meeting. In S. school, all the teachers were absent except myself and Mr. Stewart. We formed the whole school into two classes and he took the girls' class and I the boys, and Agnes Stewart played the organ for S. school and church. Rev. Stewart preached subject - "the first miracle". Received a postal from Ida. This P.M. Eunice got a number of young people together and they went swimming, but I felt so badly about it, I do not think she will do so again. She is so frivolous, that I almost dread to have the Sabbath come around, and it is usually a delightful day to me when she is not here to spoil it. I do enjoy a quiet Sabbath so much. Ed Sutherland arrived to spend his vacation of a week. He and our Eddie are fast friends. (T.S.R. 61. 2 P.M. 92. S.S. 73.)

July 21. Tuesday. Mrs. McGary came from Pacific Grove, where this morning they were shivering with cold, to find the temperature here above 100-, and she came for the purpose of cooking for headers. It seems enough to make anyone down sick to make such a sudden change. She brought me a letter from Hannah, and I have written to Hannah and Theresa. Our Eddie and Ed Sutherland started for the hills a hunting. Mary started on a visit to Linden, and Eunice is cooking in her place. Mr. and Mrs. Jones started on a trip to Santa Cruz. (T.S.R. 64. 2 P.M. 103. S.S. 87.)

1891. July 26. Sabbath. Ed Sutherland left us this morning. I have attended meeting. Rev. Stewart preached a good sermon from the words of Paul. "This one thing I do." He urged us to singleness of heart in serving God to take our religion into all our work and business of life. Eunice brought Wallace and John G. home with her to dinner. Received a letter from Ida. She has forty scholars in her school at Scotia. (T.S.R. 65. 2 P.M. 105. S.S. 86.)

July 30. Thursday. Received letter from Ida and wrote to her. She writes that her back yard is so near the school house that she does not feel obliged to have her little ones all the time in the school house with her, for she can have an eye to them as they play in her yard. She is also Supt. of the S. school, and so her days are all fully filled, and she gets no time to rest. Harry Patton shot Peter Nelson in a saloon here tonight. The ball went entirely through his body, and it would seem the wound would be fatal. Both had been drinking, and got into a row about some thing, but it was a pre-meditated deed, for Patton went out and borrowed the pistol on purpose to do it with. It would be a blessing for him to be sent to prison for a term of years - a blessing for his family and the neighborhood. We shipped our first Bartlett pears of the season. (T.S.R. 54. 2 P.M. 90. S.S. 76.)