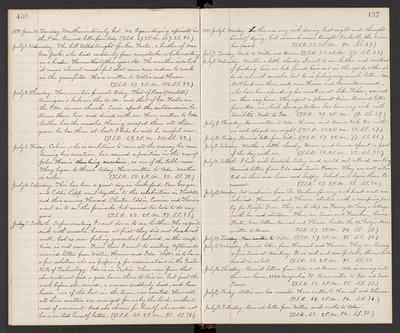 July 1. Wednesday. The bell tolled tonight for Geo. Foster, a brother of Mrs. Geo. Jack, who died suddenly from sunstroke, while working on a header. He was thirty three years old. The weather is so hot it seems almost wonderful that men can endure to work in the grainfields. Have written to Willie and Horace. (T.S.R. 67. 2 P.M. 106. S.S. 92.)

July 2. Thursday. There were two funerals today. That of Rosa (Martell) Hannigan's babe in the A.M. and that of Geo. Foster in the P.M. in our church. Susie spent the intermission between them here and dined with us. Have written to Ida. Luther has the measles. Having escaped them all these years, he has them at last. I hope he will be careful now. (T.S.R. 69. 2 P.M. 100. S.S. 82.)

July 3. Friday. Calvin, who is ambitious to earn all the money he can during his vacation, has secured a position in the crew of John Harris threshing machine, as one of the table-men. They began to thresh today. Have written to Ada. Weather is cooler. (T.S.R. 58. 2 P.M. 88. S.S. 79.)

July 4. Saturday. This has been a quiet day in Lockeford. Our Georgie and Eddie Lipp went together to the celebration in Stockton and this evening Howard, Chester, Eddie, Eunice and Theresa went in to see the fireworks, but arrived too late to do any good. (T.S.R. 63. 2 P.M. 97. S.S. 83.)

July 5. Sabbath. Before meeting I went down to see Luther. He is quite sick with measles, because at first they did not "break out" well, but is now feeling somewhat relieved, as the eruption is out more. From there I went to meeting. Afterwards received letters from Willie, Horace and Ida. Willie is to have a few scholars who are preparing for examinations in the Institute of Technology. Ida is in Scotia. There were fears that she could not find a good house there to live in, but just the week before she arrived, a woman suddenly died, and her house, one of the best in the town, was vacated. How well all these matters are arranged for us by the Lord, without need of worriment. Had she chosen for herself, she could not have suited herself better. (T.S.R. 60. 2 P.M. 93. S.S. 78.)

July 8. Wednesday. Weather a little cloudy. I went to see Luther and instead of finding him in bed, found him out in the yard, although he is red with measles, but he is feeling very much better. Mrs. McCloud was there, and soon Horace and Anna Hammond, who have been spending his vacation at Lake Tahoe, arrived on their way home. They report a pleasant time. Received letter from Ada, in which she says Weldon has been very sick with tonsilitis. Wrote to Ida. (T.S.R. 49. 2 P.M. 79. S.S. 69.)

July 12. Sabbath. I had sick headache today and could not attend meeting. Received letters from Ida and Susie Pascoe. They are well situated in their new home and happy. School is to begin there tomorrow. (T.S.R. 57. 2 P.M. 91. S.S. 80.)

July 13. Monday. Got medicine from Dr. Barbour for my sick head and am relieved. Hannah and Theresa started with a camping party for Pacific Grove. They are to stop in Fanny McGary's cottage with her and children. There are Susie and Frankie, Laura Foote, Mrs. Allen, Hannah and Theresa, besides the McGary's. Have written to Horace. (T.S.R. 57. 2 P.M. 94. S.S. 79.)