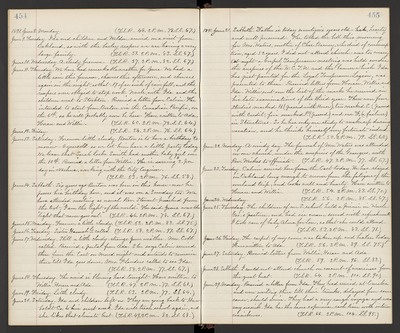 June 11. Thursday. We have had remarkable weather for June. We had a little rain this forenoon, showers this afternoon, and showers again in the night, so that .17 of an inch of rain fell, and the reapers were obliged to stop work. Uncle, with Ida and the children went to Stockton. Received a letter from Calvin. He intended to start from Boston via the Canadian Pacific, on the 6th, so he will probably soon be here. Have written to Ada, Horace and Willie. (T.S.R. 60. 2 P.M. 72. S.S. 64.)

June 13. Saturday. Forenoon little cloudy. Benton is to have a birthday tomorrow - 6 years old - so we let him have a little party today. We learn that Sarah Locke Smith had another baby girl on the 10th. Received a letter from Willie. He is earning $2. per day in Nashua, working with the City Engineer. (T.S.R. 53. 2 P.M. 76. S.S. 58.)

June 17. Wednesday. Still a little cloudy - strange June weather. Mrs. Cobb called. Received a postal from Ada. She says Calvin arrived there from the East on Mond. night and intends to remain there till Ida goes down. Mrs. Flanders called to see Ida. (T.S.R. 58. 2 P.M. 77. S.S. 67.)

1891. June 21. Sabbath. Father is today seventy six years old - hab, hearty and well preserved. He tolled the bell this morning for Mrs. Waters, mother of Chas. Barney, who died of consumption, aged 52 years. I did not attend church was too weary. At night a Gospel Temperance meeting was held under the auspices of the W.C.T.U. and the banner which Ida has just painted for the Loyal Temperance Legion, was presented to them. Received letters from Horace, Willie and Ida. Willie sent me the list of the marks he received in his late examinations of the third year. There were four studies marked H (passed with Honor), two marked C (passed with Credit, five marked P. (passed) and one F, (failure) in Structures. So he has only study to make up during vacation, and he thinks himself very fortunate indeed. (T.S.R. 50. 2 P.M. 79. S.S. 60.)

June 23. Tuesday. Calvin arrived here from the East today. He has stayed in Oakland long enough to recover from the fatigue of the overland trip, and looks well and hearty. Have written to Horace and Willie. (T.S.R. 54. 2 P.M. 83. S.S. 70.)

June 29. Monday. Received a letter from Ida. They had arrived at Eureka and were waiting there till their trunks, delayed from some cause, should arrive. They had a very rough voyage and were very seasick. Ida has the same experience each time with intense seasickness. (T.S.R. 66. 2 P.M. 104. S.S. 95.)