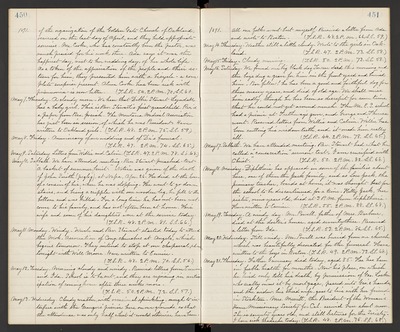 1891. of the organization of the Golden Gate Church of Oakland, occurred on the last day of April, and they held appropriate exercises. Mr. Cooke, who has constantly been the pastor, was much praised for his work there. Ada says it was the happiest day, next to her wedding day, of her whole life. As a token of the appreciation of the people and their esteem for him, they presented him with a bicycle - a complete surprise present. Alma Cooke has been sick with pneumonia is now better. (T.S.R. 54. 2 P.M. 70. S.S. 60.)

May 7. Thursday. A cloudy morn - We hear that Debbie Stewart Lyndall has a baby girl. This is Rev. Stewart's first grandchild. Rec'd a paper from Bro. Josiah. The Montana Medical Association has just been in session, of which he was President. Have written to Oakland girls. (T.S.R. 48. 2 P.M. 75. S.S. 59.)

May 10. Sabbath. We have attended meeting. Rev. Stewart preached text - "A basket of summer fruit." Notice was given of the death of John Smith (pegleg), at Napa, Apr. 26. He died at the house of a cousin of his, where he was stopping. He went to go down stairs, and being a cripple with one wooden leg, he fell to the bottom and was killed. For a long time he has not been welcome to his family, and has not often been at home. His wife and some of his daughters were at the service today. (T.S.R. 48. 2 P.M. 81. S.S. 66.)

May 11. Monday. Windy. Uncle and Rev. Stewart started today to attend the Mok. Association of Cong. churches at Angels, which begins tomorrow. They intend to stop at our chaparral place tonight with Will Moore. Have written to Eunice. (T.S.R. 48. 2 P.M. 70. S.S. 56.)

May 13. Wednesday. Cloudy weather, with occasional sprinkling, enough to interfere with the Grangers' picnic here on our grounds, so that the attendance was only half what it would otherwise have been.

May 16. Saturday. We found our big black dog Towser dead this morning and the boys dug a grave for him in the front yard and buried him. Poor fellow! he has been a good and faithful dog for these many years, and died of old age. We shall miss him sadly, though he has been so decrepit for some time that he could not get around much. The M.E.S. school had a picnic at Tretheway's grove, and George and Theresa went. Received letters from Willie and Calvin. Willie has been cutting his wisdom teeth, and it made him really ill. (T.S.R. 44. 2 P.M. 78. S.S. 65.)

May 18. Monday. Diphtheria has appeared in some of the families about here, one of them the Jack family, and as Lou Jack, the primary teacher, boards at home, it was thought best for the school to be discontinued for a time. Kitty Jack, her sister, nine years old, died at 3 P.M. from diphtheria. Have written to Eunice. (T.S.R. 55. 2 P.M. 88. S.S. 68.)

May 21. Thursday. Father Guernsey died today, aged 85. He has been in feeble health for months. Now his place, on which he lived only till his death, by permission of Geo. Locke who really owns it by mortgage, passed into Geo.'s hands, and the widow, his third wife, goes to live with her friends in Stockton. Mrs. Merritt, the President of the Woman's Home Missionary Society for Cal. arrived here about noon. She is seventy years old, and still lectures for the Society. I have sick headache today. (T.S.R. 48. 2 P.M. 76. S.S. 68.)