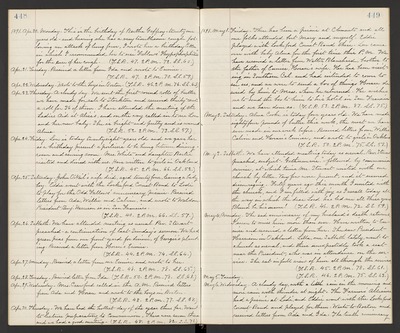 1891. Apr. 20. Monday. This is the birthday of Bertha Geffroy - twenty one years old and hearing she has a very troublesome cough following an attack of lung fever, I wrote her a birthday letter in which I recommended her to use "Fellows' Hypophosphites" for the cure of her cough. (T.S.R. 47. 2 P.M. 72. S.S. 63.)

Apr. 23. Thursday. A cloudy day. We sent the first round rolls of butter we have made for sale to Stockton and received thirty cents a roll for 36 of them. I have attended the meeting of the Ladies Aid at Alice's, and on the way called in to see Lou and her new baby. She is bright and pretty and is named Alma. (T.S.R. 52. 2 P.M. 73. S.S. 57.)

Apr. 24. Friday. Lou is today twentyeight years old and we gave her as a birthday present a portierre to be hung between dining room and sewing room. Mrs. White and daughter Bertie visited and dined with us. Have written to girls in Oakland. (T.S.R. 45. 2 P.M. 66. S.S. 52.)

Apr. 26. Sabbath. We have attended meeting as usual. Rev. Stewart preached a continuation of last Sunday's sermon. We had green peas from our front yard for dinner, of Georgie's planting. Received a letter from Horace's Eunice. (T.S.R. 44. 2 P.M. 74. S.S. 64.)

1891. May 1. Friday. There has been a picnic at Clements and all our folks attended but Mary and myself. Eddie played with Lockeford Cornet Band there. Lou came over with baby Alma for the first time this P.M. We have received a letter from Walter Blanchard, brother to the father of Eunice, Horace's wife. He has been visiting in Southern Cal. and had intended to come to see us, and we were to send a box of things Horace desired by him to Mass. when he returned. He wishes us to send the box to him to his hotel in San Francisco and we have done so. (T.S.R. 53. 2 P.M. 87. S.S. 75.)

May 2. Saturday. Alma Cooke is today four years old. We have made eighty four pounds of butter this week, the most we have ever made in one week before. Received letters from Willie Calvin and Horace's Eunice, and wrote to girls in Oakland (T.S.R. 50. 2 P.M. 75. S.S. 58.)

May 3. Sabbath. We have attended meeting today as usual. Rev. Stewart preached, subject "Gethsemane." followed by communion service, at which time Mr. Stewart united with our church by letter. Very few were present, and it seemed discouraging. Forty years ago this month I united with the church, and I am filled with joy as I recall today all the way in which the dear Lord has led me all these years. Blessed be his name! (T.S.R. 46. 2 P.M. 72. S.S. 59.)

May 4. Monday. The sad anniversary of my husband's death returns I seem to miss him more than ever. Have written to Eunice and received a letter from her. She saw President Harrison in Oakland. Lilla, one Sabbath lately, went to church as usual, and there unexpectedly took a seat near the President, who was in attendance on the service. She sat in fall view of him all through the service. (T.S.R. 45. 2 P.M. 78. S.S. 61.)

May 6. Wednesday. A cloudy day, with a little rain in the morning and more rain with thunder at night. The Farmers' Alliance had a picnic at Lodi, and Eddie went with the Lockeford Cornet Band and played for them. Wrote to Boston and received letters from Ada and Ida. The tenth anniversary