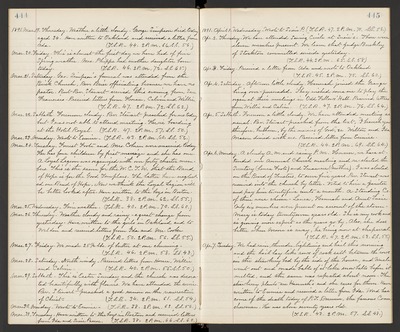 Mar. 21. Saturday. Geo. Simpson's funeral was attended from the Brick Church, Rev, Brier officiating because we have no pastor. But Rev. Stewart arrived this evening from San Francisco. Received letters from Horace, Calvin and Willie. (T.S.R. 47. 2 P.M. 72. S.S. 62.)

Mar. 24. Tuesday. Forrest Foote and Mrs. Coburn were married today. He has four children by first marriage and she has one. A Loyal Legion was organized with over forty charter members. This is the same for the W.C.T.U. that the Band of Hope is for the Good Templars. The latter have neglected our Band of Hope. Now we think the Loyal Legion will be better looked after. Have written to the boys in Boston. (T.S.R. 38. 2 P.M. 62. S.S. 55.)

Mar. 29. Sabbath. This is Easter Sunday and the church was decorated beautifully with flowers. We have attended the service. Rev. Stewart preached a good sermon on the resurrection of Christ. (T.S.R. 34. 2 P.M. 61. S.S. 54.)

Apr. 4. Saturday. Afternoon little cloudy. Hannah joined the Grange being over persuaded. They wished someone to play the organ at their meetings in Odd Fellows' hall. Received letters from Willie and Calvin. (T.S.R. 47. 2 P.M. 76. S.S. 64.)

Apr. 6. Monday. A cloudy A.M. and rainy P.M. However, we have attended our Annual Church meeting and re-elected the Secretary (Laura Foote) and Treasurer (Mother). I was elected on the Board of Trustees, to serve five years. Rev. Stewart was received into the church by letter. Voted to hire a Janitor and pay him twenty five cents a month. A Standing Co. of three were chosen Laura, Hannah and Aunt Susie. Only six members were present on account of the storm. Mary is today twenty seven years old. She is my cook and is growing more expert as the years go by. Also, she does better when Moore is away, he being now at chaparral. (T.S.R. 47. 2 P.M. 63. S.S. 55.)

Apr. 7. Tuesday. We had rain, thunder, lightning and hail this morning and the hail lay like rows of rock salt between the rows in the strawberry bed by the side of the house, and Uncle went out and made balls of it like snowballs before it melted, and the same was repeated about noon. The strawberry plants are Hannah's and she cares for them. Have written to Eunice and received a letter from Ida. Word has come of the death today of P. T. Barnum, the famous Conn. showman. He was above seventy years old. (T.S.R. 43. 2 P.M. 57. S.S. 48.)