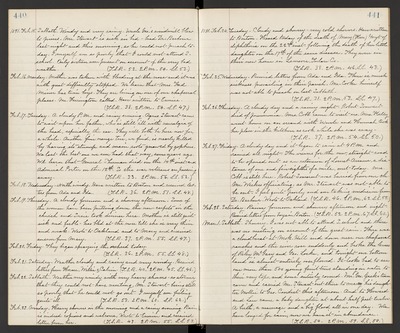 Feb. 16. Monday. Mother was taken with bleeding at the nose and it was with great difficulty stopped. We learn that Mrs. Fred Miner has twin boys. They are living on one of our chaparral places. Mr. Farrington called. Have written to Eunice. (T.S.R. 38. 2 P.M. 54. S.S. 47.)

Feb . 17. Tuesday. A cloudy P.M. and rainy evening. Agnes Stewart came to wait upon her father, who is still ill with neuralgia of the head, especially the car. They will both be here now for a while. Another fine orange tree, we find, is nearly killed by having its stump and main roots gnawed by gophers. We lost the best one we ever had that way, some years ago. We learn that General Sherman died on the 14th inst. and Admiral Porter on the 12th. So the war veterans are passing away. (T.S.R. 33. 2 P.M. 56. S.S. 52.)

Feb. 19. Thursday. A cloudy forenoon and a showery afternoon. Some of the women have been putting down the new carpets in the church and Susie took dinner here. Mother is still quite sick and feeble - has bled at the nose till she is very thin and weak. Wrote to Oakland and to Mary and received answer from Mary. (T.S.R. 37. 2 P.M. 55. S.S. 47.)

Feb. 27. Friday. A cloudy day and it began to rain at 4 P.M. and rained all night. The viewers for the new, straight road to be opened out as an extension of Locust Avenue, a distance of one and five eights of a mile, met today. Mrs. Cobb is still here. Robert Somerset was buried from our ch. Mr. Wickes officiating, as Mr. Stewart was not able to be out. I feel quite poorly and am taking medicine from Dr. Barbour. Wrote to Oakland. (T.S.R. 46. 2 P.M. 62. S.S. 55.)

Mar. 1. Sabbath. Showery. I was not able to attend. S. school and there was no meeting on account of the great rain. There was a cloud burst at Mok. Hill and down near our chaparral ranches and the river rose suddenly and broke the levees of Riley McGary and Geo. Locke, and tonight our bottom land is almost entirely over flowed. It looks bad to see our more than 500 young fruit trees standing in water to their very tops, and some entirely covered. Mr. Geo. Jack's team came and carried Mr. Stewart out there to marry his daughter Mollie to Geo. Condict this afternoon. And to Howard and Lou came a baby daughter at about half past twelve. A birth, a marriage and a big flood all in one day. We have longed for rain, now we have it in abundance. (T.S.R. 54. 2 P.M. 59. S.S. 58.)