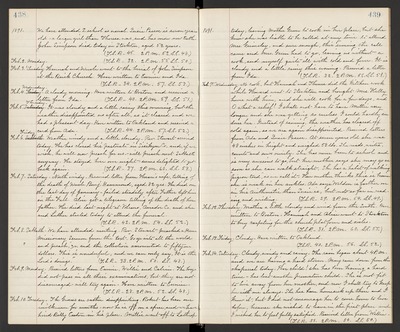 Feb. 6. Friday. Weather windy and a little cloudy. Rev. Stewart arrived today. He has closed his pastorate in Sisikyou Co. and, if we wish, he will now preach for us, - will preach next Sabbath anyway. He stayed here over night - seems delighted to get back again. (T.S.R. 37. 2 P.M. 60. S.S. 53.)

Feb. 7. Saturday. North windy. Received letter from Horace's wife, telling of the death of Uncle Benj. Hammond, aged 82 yrs. He died on the last day of January, failed steadily after Father left him in the Fall. Alice got a telegram telling of the death of her father. He died last night at Volcano, Amador Co. and she and Luther started today to attend the funeral. (T.S.R. 42. 2 P.M. 54. S.S. 52.)

Feb. 10. Tuesday. The Greens are rather disappointing. Robert has been our milkman for months - now he is off on a spree, and we have hired Billy Easton in his place. Mettie went off to Lathrop

1891. today, leaving Mother Green to cook in her place, but she knew she was liable to be called at any time to attend Mrs. Grimsley, and sure enough, this evening the call came and Mrs. Green had to go, leaving us without a cook, and myself quite ill with cold and fever. It is cloudy and a little rainy this evening. Received a letter from Ida. (T.S.R. 32. 2 P.M. 56. S.S. 51.)

Feb. 11. Wednesday. No cook, but Hannah and Theresa did the kitchen work while Howard went to Stockton and brought Mrs. Kelly home with him, and she will cook for a few days, and O what a relief! I shall not have to have Mettie any longer, and she was getting so careless I could hardly endure her. Instead of raining, the weather has cleared off cold again, so we are again disappointed. Received letters from Ada and Susie Pascoe. At seven years old she was 48 inches in height and weighed 58 lbs. She reads, writes, counts and sews nicely. She has never been to school and is very anxious to go, but her mother says she may go as soon as she can walk straight. She has a habit of walking "pigeon toed", as we call it. Her mother thinks this is because she is weak in her ankles. Ada says Weldon is farther on in his Arithmetic than Susie is, but not so far in reading and writing. (T.S.R. 29. 2 P.M. 54. S.S. 49.)

Feb. 14. Saturday. Cloudy, windy and rainy. The rain began about 4 P.M. and we are having a hard storm. Mary came down from the chaparral today. Poor child! She has been having a hard time - has lost another premature child. She is not fit to live away from her mother, and now I shall try to keep her with me always. She has been homesick up there and I knew it, but I did not encourage her to come home to live before, because she wished to leave in the first place and I wished her to feel fully satisfied. Received letter from Willie. (T.S.R. 51. 2 P.M. 50. S.S. 50.)