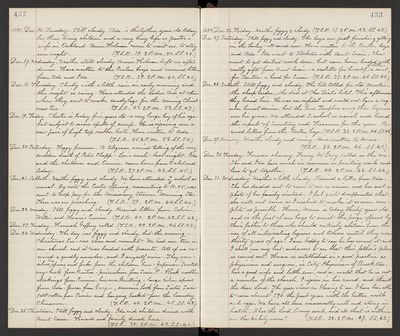 Dec. 24. Wednesday. The day was foggy and cloudy, but the evening - Christmas Eve - was clear and moonlit. We had our tree in our church and it was loaded with presents. All of us received a goodly number, and I myself nine. They were - silver teaspoons and forks from the children here - Japanese "Scratch-my-back" from Benton, pincushion from Susie P. black woollen stockings from Eunice, her own knitting - large silver spoons from Ada - purse from Georgie, souvenir book from Sister Susie - salt collar from Eunice and hanging baskets from the laundry Chinamen. (T.S.R. 40. 2 P.M. 45. S.S. 43.)

Dec. 27. Saturday. Still foggy and cloudy. The boys are just finishing getting in the barley - all sewed now. Have written to the Boston boys and Ada. Ida went to Stockton with Aunt Susie. She went to get dentist work done, but came home loaded with costly gifts from Aunt Susie, a sealette for herself, a suit of clothes for Benton, a hood for Susie. (T.S.R. 37. 2 P.M. 41. S.S. 40.)

Dec. 28. Sabbath. Still foggy and cloudy. The bell tolled for old Martin, the sheep herder, who died at Chas. Dial's hotel. This afternoon they buried him. He was an infidel and would not have a regular burial service, but the Good Templars sung three hymns over his grave. We attended S. school as usual and heard the reports of Secretary and Treasurer for the year. Received letters from the Boston boys. (T.S.R. 38. 2 P.M. 46. S.S. 43.)

Dec. 31. Wednesday. Weather a little cloudy. Received a letter from Ada. She has decided not to come to our re-union, and has sent a photo of her family instead. I feel quite disappointed that she will not come as I wished to make it as near complete as possible. Horace Mann is today thirty years old, and is the first of our boys to merit the prize offered by their father to those who should entirely abstain from the use of all intoxicating liquors and tobacco until they were thirty years of age. I am happy to say he has earned it, and I shall use my best endeavours to see that their father's plan is carried out. Horace is established in a good practice as physician and surgeon, is City Physician of Brockton, has a good wife and little son, and so, except that he is not a member of the church, I rejoice in his record, and thank the dear Lord. The year closes in blessing to us. I have been able to earn almost $590. the past year with the butter, milk and eggs. We have all been unusually well and strong in health. Bless the Lord, O my soul, and all that is within me bless His holy name! (T.S.R. 32. 2 P.M. 47. S.S. 43.)