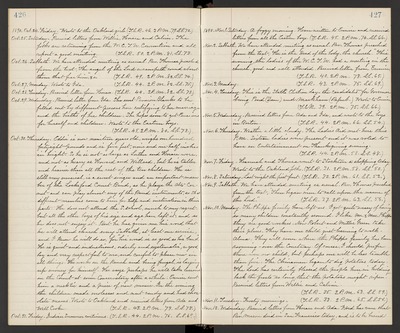 Oct. 29. Wednesday. Received letter from Ida. She sent Pension Blanks to be filled out by different persons here certifying to her marriage and the births of her children. She hopes soon to get Pensions for herself and children. Wrote to the Eastern boys. (T.S.R. 45. 2 P.M. 80. S.S. 73.)

Oct. 30. Thursday. Eddie is now nineteen years old, weighs one hundred fortyeight pounds and is five feet, nine and one-half inches in height. So he is not as large as Luther and Horace were, and not as heavy as Howard and Willard, but he is taller and heavier than all the rest of the ten children. He is still very musical, is a sweet singer and an important member of the Lockeford Cornet Band, as he plays the Alto Cornet and can play almost any of the Band instruments, so that different members come to him for help and instruction in their parts. He does not attend the S. school, much to my regret, but all the other boys of his size and age have left it, and so he does not enjoy it. But he has given me his word that he will attend church every Sabbath, at least one service, and I know he will do so, for "his word is as good as his bond." He is quiet and industrious, orderly and systematic, a good boy and very respectful to me, and careful to please me in all things. He works on the Ranch and being frugal, is laying up money for himself. He says perhaps he will take lessons on the Cornet at some Conservatory after a while. Eunice sent him a necktie and a piece of new music. In the evening the children made molasses and nut candy and had chocolate creams. Wrote to Oakland and received letters from Ada and Will Cooke. (T.S.R. 43. 2 P.M. 79. S.S. 73.)

Nov. 10. Monday. The Phipps family have left us. I got quite weary of having so many children constantly around. I like Mr. & Mrs. Phipps they are good workers. Now Robert and Mettie Green take their places. They have one child just learning to walk - Alma. They will room where the Phipps family has been rooming - over the Courtway. Of course, I should prefer there were no child, but perhaps one will be less trouble than five. The Chinamen began to dig potatoes today. The Lord has certainly blessed the people here in holding back the frosts so long, that the potatoes might ripen. Received letters from Willie and Calvin. (T.S.R. 35. 2 P.M. 63. S.S. 59.)

Nov. 12. Wednesday. Received letters from Horace and Ada. Word has come that Rev. Mason died in San Francisco today, and is to be buried