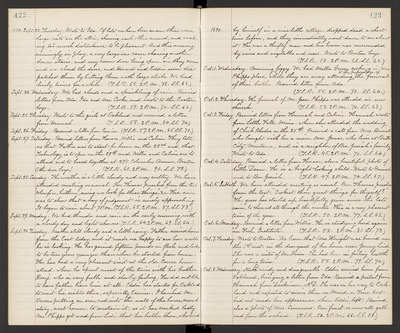 1890. Sept. 23. Tuesday. Wrote to Ida. Of late we have been aware there were large rats in the attic, chasing each other around, and making too much disturbance to be pleasant. And this evening, seemingly in play, a very large one came chasing another down stairs, and my room door being open, in they came and we closed the doors, and Howard and Eddie soon dispatched them by hitting them with large sticks. We had lively times for a while. (T.S.R. 55. 2 P.M. 78. S.S. 68.)

Sept. 30. Tuesday. Weather still cloudy and a little rainy. Father arrived home from the East today, and it made us happy to see how well he is looking. He has gained fifteen pounds in flesh and looks to be ten years younger than when he started from home. He has had a very pleasant visit at the old Carver homestead, where he spent most of the time with his brother Benj. who is very feeble and slowly failing. He did not like to have father leave him at all. Eddie has started for Oakland to visit his sisters there, especially Eunice. I have had Mr. Owens putting an iron rod into the wall of the house, second story, west corner, to sustain it, as it has cracked badly. Mr. Phipps got word from Lodi that his brother there, who lived

1890. by himself in a nice little cottage, dropped dead a short time before, and they immediately went down to see about it. He was a thrifty man and his house was surrounded by vines and vegetables and roses. Wrote to Boston boys. (T.S.R. 58. 2 P.M. 66. S.S. 60.)

Oct. 1. Wednesday. Morning foggy. We had Metta Greeny cooking in Mrs. Phipps place, while they are away attending to the preparation of the funeral of their brother. Received letter from Ada. (T.S.R. 55. 2 P.M. 70. S.S. 64.)

Oct. 3. Friday. Received letters from Hannah and Calvin. Hannah wrote from Little Falls, Minn. where she attended the wedding of Chick Rhodes on the 25th. Received a call from Mrs. Bruml who brought with her a niece, Mrs. Jonas, who lives at Butte City, Montana, and is a neighbor of Bro. Josiah's family. Wrote to Ada. (T.S.R. 45 2 P.M. 70. S.S. 64.)

Oct. 5. Sabbath. We have attended meeting as usual. Rev. Thomas preached from the text, "Seekest thou great things for thyself?" The grass has started beautifully green since the late rain, to cheer us all through the winter. This a very pleasant time of the year. (T.S.R. 50. 2 P.M. 77. S.S. 68.)

Oct. 8. Wednesday. North windy and disagreeable. Eddie arrived home from Oakland, bringing a letter from Ida. Received a postal from Hannah from Dickinson, N.D. She was on her way to Oakland and expected to arrive there on Mond. or Tues. but had not made her appearance when Eddie left. Received also a photo of Mrs. Simmons. Our fruit is now all gathered from the orchard. (T.S.R. 50. 2 P.M. 66. S.S. 58.)