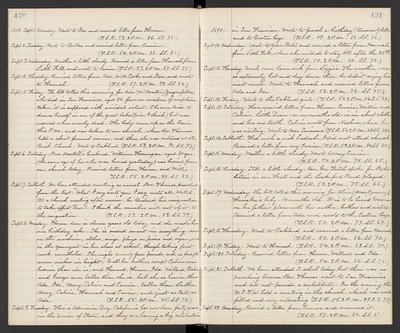 Sept. 5. Friday. The bell tolled this morning for Ada (McMartin) Ziegnefelder, who died in San Francisco, aged 30, from an overdose of morphine, taken, it is supposed with suicidal intent. She once tried to drown herself in one of the great lakes (Eric, I think) but was rescued when nearly dead. The body came up on the train this P.M. and was taken to our church, where Rev. Thomas held a short funeral service, and then she was interred at the Brick Church. Wrote to Oakland. (T.S.R. 53. 2 P.M. 90. S.S. 77.)

Sept. 7. Sabbath. We have attended meeting as usual. Rev. Thomas preached from the text, "What I say unto you I say unto all, Watch." At a church meeting after service, he tendered his resignation to take effect Dec. 1. I think the members will not object to the resignation. (T.S.R. 53. 2 P.M. 83. S.S. 79.)

Sept. 8. Monday. Theresa dear is eleven years old today and she made her own birthday cake. She is indeed smart in everything, sews on the machine, etches, sings, plays on piano and organ, and is the youngest in her class at school, though taking first rank, nevertheless. She weighs seventy four pounds, and is four ft. seven inches in height. So all her brothers except Calvin were heavier than she is, and Howard, Horace, Ida, Willard, Eddie and George were taller than she is, but she is heavier than Ada, Ida, Mary, Calvin and Eunice, taller than Luther, Mary, Calvin, Hannah and Eunice, and just as tall as Ada. (T.S.R. 55. 2 P.M. 85. S.S. 73.)

Sept. 9. Tuesday. This is Admission Day. California has now been forty years in the Union of States, and they are having a big celebration

Sept. 17. Wednesday. The bell tolled this morning for Alice (Montgomery) Hamakee's baby - 14 months old. It is to be buried tomorrow on her father's place with her mother, brothers and sisters. Received a letter from Ada and wrote to the Eastern boys. (T.S.R. 50. 2 P.M. 77. S.S. 67.)

Sept. 21. Sabbath. We have attended S. school today, but there was no preaching because Rev. Thomas went to San Francisco and did not provide a substitute. In the evening, the W.C.T.U. held a meeting in the church, which was well filled and very interesting. (T.S.R. 55. 2 P.M. 89. S.S. 77.)