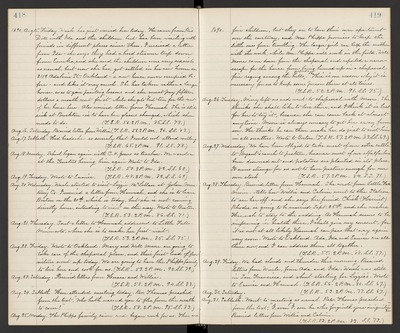 1890. Aug. 15. Friday. Uncle has first arrived here today. He came from Rio Dell with Ida and the children but has been visiting with friends in different places since then. I received a letter from Ida - she says they had a hard steamer trip down from Eureka, and she and the children were very seasick as usual, but now she has got settled in her new home on 2119 Adaline St. Oakland - a new house never occupied before - and likes it very much. She has taken rather a large house, so as to give painting lessons and she must pay fifteen dollars a month rent for it, while she gets but ten for the rent of her house here. Also received letter from Hannah. She is still sick at Brockton - is to have her glasses changed, which she needs to do. (T.S.R. 56. 2 P.M. 85. S.S. 73.)

Aug. 20. Wednesday. Uncle started to visit Lizzie McLellan at Jolon Monterey Co. I received a letter from Hannah, and she is to leave Boston on the 20th, which is today, but she is not coming directly home, intending to visit on the way. Wrote to Boston. (T.S.R. 53. 2 P.M. 86. S.S. 71.)

Aug. 25. Monday. The Phipps family came and began work for us. There are

1890. five children, but they are to have their own apartment over the courtway, and Mrs. Phipps promises to keep the little ones from troubling. The larger girls can help the mother with the work, while Mr. Phipps will work in the field. Will Moore came down from the chaparral and reported a narrow escape for the house from being burned up in a chaparral fire raging among the hills yesterday. This is one reason why it is necessary for us to keep some person there at all times. (T.S.R 58. 2 P.M. 91. S.S. 75.)

Aug. 26. Tuesday. Mary left us and went to chaparral with Moore. She thinks she shall like to live there, and I think it is best for her to try it, because she can come back at almost anytime. Moore is always uneasy to get her away from me. He thinks he can then make her do just to suit him in all matters. Wrote to Boston. (T.S.R. 57. 2 P.M. 83. S.S. 69.)

Aug. 27. Wednesday. We have been obliged to take most of our extra cattle to Bryant's ranch to pasture, because most of our alfalfa has been drowned out and potatoes are planted in its place. It seems strange for us not to have pasture enough for our own stock. (T.S.R. 57. 2 P.M. 84. S.S. 71.)

Aug. 28. Thursday. Received letter from Hannah. She wrote from Little Falls Minn. - tells how Willie and Calvin went to the Station to see her off - and she says her friend Chick (Harriet) Rhodes is going to be married Sept. 25th, and she wishes Hannah to stay to the wedding. As Hannah seems to be improving in health there, I shall give my consent, for it is not at all likely Hannah can pass that way again very soon. Wrote to Oakland. Ada, Ida and Eunice are all there now, and I can address them all together. (T.S.R. 55. 2 P.M. 88. S.S. 77.)