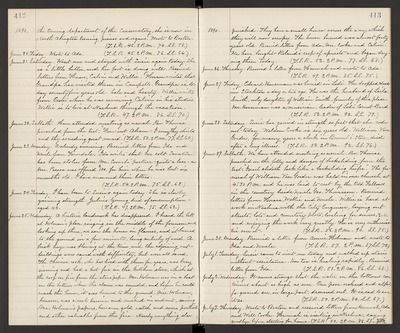 June 21. Saturday. Went over and stayed with Susie again today. She is a little better, and her foot is doing well. Received letters from Horace, Calvin and Willie. Horace writes that Grandpa has visited them in Campello. Grandpa is today seventyfive years old - hale and hearty. Willie writes from Exeter where he was reviewing Calvin in his studies. Willie is to live at Nashua through the vacation. (T.S.R. 47. 2 P.M. 86. S.S. 70.)

June 25. Wednesday. A historic landmark has disappeared. I heard the bell at Holman's place ringing in the middle of the forenoon, and looking up there, we saw the house in flames, and it burned to the ground in a few minutes, being entirely of wood. A brisk breeze was blowing at the time, and the adjoining out-buildings were saved with difficulty, but were all saved. The Chinese cook, who has lived with them for years, was busy ironing and had a hot fire in the kitchen stove, which set the roof on fire from the stove pipe. Mr. Holman was in a boat on the bottom when the alarm was sounded, and before he could reach the house, it was burned to the ground. Mrs. Holman, however, was a real heroine and rushed in and out, saving Mr. Holman's papers, her own gold watch and some portraits and other valuables from the fire. Nearly everything else

1890. perished. They have a small house across the way, which they will now occupy. The house burned was almost forty years old. Received letters from Ada, Mr. Cooke and Calvin. We have bought Roland's crop of apricots and began drying them today. (T.S.R. 52. 2 P.M. 77. S.S. 68.)

June 27. Friday. Edward Houseman was buried in Lodi. He dropped dead in Stockton a day or two ago. He was the husband of Leila Smith, only daughter of William Smith, formerly of this place. Mr. Houseman was a musician, leader of Lodi Cornet Band. (T.S.R. 52. 2 P.M. 92. S.S. 79.)

June 29. Sabbath. We have attended meeting as usual. Rev. Thomas preached on the folly and danger of backsliding, from the text, "Israel slideth back like a backsliding heifer". The funeral of William Van Gorder was held in our church at 4:30 P.M. and he was laid to rest by the Odd Fellows in the cemetery beside Uncle Geo. Thomason. Received letters from Horace, Willie and Uncle. Willie is hard at work in Nashua with the City Engineer, laying out streets, lots and cemetery plots, leveling for sewers, &.c. and enjoying the work very greatly. He is very enthusiastic over it. (T.S.R. 56. 2 P.M. 90. S.S. 75.)