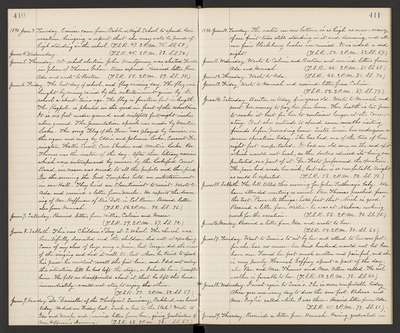 June 6. Friday. The last day of school, and "flag raising" day. The flag was bought by money raised by the entertainment given by the school a short time ago. The flag is fourteen feet in length. The flagpole is planted in the yard in front of the school house. It is six feet under ground and sixtytwo feet, eight inches above ground. The presentation speech was made by Mertice Locke. The song "Flag of the Free" was played by Eunice on the organ and sung by Eddie and Johnnie Locke, Earnest Farrington, Hattie Covert, Cora Sherden and Mertice Locke. Rev. Thomas was the orator of the day. After these literary exercises which were interspersed by music by the Lockeford Cornet Band, ice cream was served to all the pupils and their friends. In the evening the Good Templars held an entertainment in our Hall. They hired an Elocutionist to assist. Wrote to Ada and received a letter from Uncle. He reports the drowning of Mr. Hoffman of Rio Dell in Eel River. Received letter also from Hannah. (T.S.R. 56. 2 P.M. 92. S.S. 76.)

June 8. Sabbath. This was Children's Day at S. school. The church was beautifully decorated and the children did well at speaking. Some of my class of boys sung a piece, but Georgie did the most of the singing and did it well, too, but when he tried to speak his piece, he couldn't recall the first line, and I did not realize the situation till he had left the stage, or I should have prompted him. He felt so disappointed about it, that he left the house immediately - would not stay to enjoy the others. (T.S.R. 51. 2 P.M. 83. S.S. 67.)

June 9. Monday. Dr. Dwinella of the Theological Seminary, Oakland, was buried today. He died on Friday last. Such a loss to the State! Wrote to Ida and Uncle and received letter from her, giving particulars of Mr. Hoffman's drowning. (T.S.R. 48. 2 P.M. 78. S.S. 67.)

June 14. Saturday. Benton is today fiveyears old. Wrote to Hannah and sent her money to pay her fare home. Her health is too poor to make it best for her to continue longer at the Conservatory. But she intends to spend some months visiting friends before proceeding home. Sister Susie has undergone a severe operation today. She has had one of the toes of her right foot amputated. It had an old sore on the end of it which would not heal, so the doctors advised its being amputated, or a part of it. Dr. Foote performed the operation. The pain had made her sick, but she is as comfortable tonight as could be expected. (T.S.R. 58. 2 P.M. 92. S.S. 78.)

June 15. Sabbath. The bell tolled this morning for John Tretheway's baby. We have attended meeting as usual. Rev. Thomas preached from the text, "Prove all things; hold fast that which is good." Received a letter from Willie - he was at Nashua seeking work for the vacation. (T.S.R. 58. 2 P.M. 90. S.S. 75.)

June 17. Tuesday. Went to Susie's to sit by her and attend to her sore foot, for she has no nurse - her kind husband would not let her have one. Found her foot much swollen and painful, and she is very poorly. Hannah Geffroy spent a part of the day, also Rev. and Mrs. Thomas and Mrs. Allen called. The cool weather is favorable to her. (T.S.R. 50. 2 P.M. 78. S.S. 60.)

June 19. Thursday. Received a letter from Hannah. Having graduated in