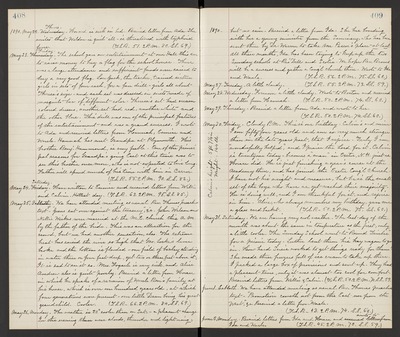 May 23. Friday. The school gave an entertainment at our Hall this eve to raise money to buy a flag for the school house. There was a large attendance and sufficient funds were raised to buy a very good flag. Lou Jack, the teacher, trained sixteen girls in sets of four each, for a fan drill - girls all about Theresa's size - and each set was dressed in suits made of mosquito bar of a different color - Theresa's set had cream colored dresses, another set had red, another white and the other blue. This drill was one of the principal features of the entertainment - and was a grand success. I wrote to Ada and received letters from Hannah, Eunice and Uncle. Hannah has met Grandpa at Plymouth. His brother Benj. Hammond, is very feeble. One of the principal reasons for Grandpa's going East at this time was to see this brother once more, who is not expected to live long. Father will spend much of his time with him in Carver. (T.S.R. 55. 2 P.M. 90. S.S. 82.)

May 25. Sabbath. We have attended meeting as usual. Rev. Thomas preached text - "Jesus eat over against the treasury", &.c. John Wilson and Nellie Wickes were married at the M.E. church this A.M. by the father of the bride. This was an attraction for the crowd, but we had another sensation, also. The extreme heat has raised the river so high that Geo. Locke's lever broke and the bottom is flooded - one field of bailey standing in water three or four feet deep, yet two or three feet above it. It is sad to see it so. Mrs. Fogarle is very sick, and Alice Andrew also is quite poorly. Received a letter from Horace in which he speaks of a reunion of Uncle Ben's family at his house, which is over one hundred years old, at which four generations were present - our little Dean being his great-grandchild. Cooler. (T.S.R. 66. 2 P.M. 84. S.S. 69.)

May 26. Monday. The weather is 20- cooler than on Sat. - a pleasant change. In the evening there were clouds, thunder and lightning,

1890. but no rain. Received a letter from Ida. She has boarding with her a young minister from the Seminary, who has been sent there by Dr. Warren to take Mr. Pascoe's place at last. All these months, Ida has been trying to keep up the two Sunday schools at Rio Dell and Scotia. We hope Rev. Broms will be a success and gather a Cong'l church there. Wrote to Ida and Uncle. (T.S.R. 56. 2 P.M. 75. S.S. 60.)

May 30. Friday. Cloudy P.M. This is our birthday - Calvin's and mine. I am fiftyfour years old and am so very much stronger than in the late years past, that I rejoice. Truly I am "wonderfully helped", and I praise the Lord for it. Calvin is twenty one today - becomes a "man" in Exeter, N.H. just as Horace did. He is just finishing a year's course at the Academy there, and has joined the Exeter Cong'l Church. I have not his weight and measure, but he is the smallest of the boys who have as yet reached their majority. He is doing well, and I am thankful for it, and rejoice in him. Alice, who always remembers my birthday, gave me a glass card basket. (T.S.R. 50. 2 P.M. 75. S.S. 60.)

May 31. Saturday. We are having very cool weather. The last day of the month was about the same in temperature as the first, only a little cooler. The Sunday School went to "Round Timber" for a picnic today. Luther lent them his hay wagon to go in. How hard Susie worked to get things ready for them? She made three freezers full of ice cream to take up there. I packed a large box of provisions and sent up. They had a pleasant time, only it was almost too cool for comfort. Received letters from Willie & Calvin. (T.S.R. 50. 2 P.M. 70. S.S. 59.)