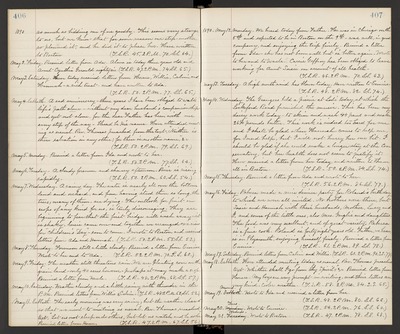 May 4. Sabbath. A sad anniversary - three years I have been obliged to walk life's path alone - without my dear husband's companionship - and yet not alone, for the dear Father has been with me every step of the way - blessed be His name. Have attended meeting as usual. Rev. Thomas preached from the text, "Neither is there salvation in any other; for there is no other name," &c (T.S.R. 50. 2 P.M. 79. S.S. 69.)

May 7. Wednesday. A rainy day. The water is nearly all over the bottom land and orchard, and from having stood there so long, the trees, many of them, are dying. The outlook for fruit or crops of any kind for us, is truly discouraging. They are beginning to fear that the first bridge will wash away, it is shaky. Susie came over and together we arrange exercises for "Children's Day" - soon to come. I wrote to Boston and received letters from Ada and Hannah. (T.S.R. 50. 2 P.M. 55. S.S. 53.)

1890. May 12. Monday. We heard today from Father. He was in Chicago on the 5th and expected to be in Boston on the 9th. - was well, in good company, and enjoying the trip finely. Received a letter from Ida - she has not been well but is better again. Wrote to her and to Uncle. Carrie Geffroy has been obliged to leave working for Aunt Susie on account of ill health. (T.S.R. 46. 2 P.M. 70. S.S 63.)

May 14. Wednesday. The Grangers held a picnic at Lodi today, at which the Lockeford Band furnished the music. This has been my dairy work today - to skim and wash 44 pans and make 26 1/4 pounds butter. This work is indeed too hard for me and I shall be glad when Hannah comes to help me, for I need help, but I will not hurry her one bit. I should be glad if she could make a longer stay at the Conservatory, but her health does not seem to justify it. Have received a letter from her today, and written to them all in Boston. (T.S.R. 50. 2 P.M. 84. S.S. 74.)

May 16. Friday. Rebecca made a nice dinner party for Roland's birthday to which we were all invited. No brothers were there, but Susie and Hannah with their husbands, Mother, Lucy and I, and some of the little ones, also Mrs. Inglis and daughters. The food was very excellent, and of great variety. Rebecca is a fine cook. Roland is fortyeight years old. Father, we hear, is in Plymouth, enjoying himself finely. Received a letter from Eunice. (T.S.R. 61. 2 P.M. 89. S.S. 78.)

May 18. Sabbath. Have attended meeting today as usual. Rev. Thomas preached text - "Whither shall I go from thy spirit" - &c Received letter from Horace. My boys are very prompt in writing, and their letters are very kind. Cooler weather. (T.S.R 58. 2 P.M. 84. S.S. 65.)