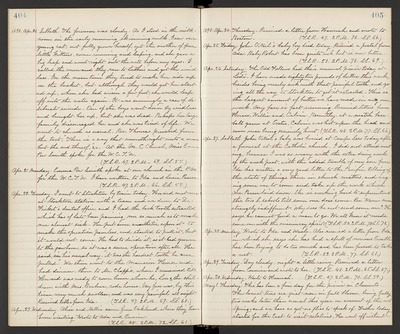 1890. Apr. 20. Sabbath. The forenoon was cloudy. As I stood in the milkroom in the early morning skimming milk, I saw our young cat, not fully grown herself, yet the mother of four little kittens, come running and leaping, and she gave a big leap and went right into the well before my eyes. I called the men and they ran to Luther's and got the windlass. In the meantime they tried to make her ride up on the bucket, but although they would get her started up, when she had arisen a few feet, she would leap off into the water again. It was seemingly a case of deliberate suicide. One of the boys went down by windlass and brought her up, but she was dead. Perhaps her large family discouraged her and she was tired of life. We went to church as usual. Rev. Thomas preached from the text, "There is a way that seemeth right unto a man but the end thereof," &.c. At the M. E. Church, Miss Emma Pow Smith spoke for the W.C.T.U. (T.S.R. 47. 2 P.M. 69. S.S. 55.)

Apr. 22. Tuesday. I went to Stockton by train today. Howard met me at Stockton station with a team and we drove to Dr. Ficket's dental office, and I had the back tooth extracted which has of late been paining me so much as to make me almost sick. He put some anaesthetic upon it to make the operation painless, and started to pull it, but it would not come. He had to divide it, as it had grown to the jawbone, so it was a severe operation, after all. He said, in his usual way, "it was the hardest tooth he ever pulled." We then went to the Mansion House and had dinner, there to Mr. Clapp's, where I remained till Howard was ready to come home, when he, Lou & the children, with Mrs. Barbour, rode home. My face was, by this time, very much swollen, and was very painful all night. Received letter from Ida. (T.S.R. 47. 2 P.M. 69. S.S. 60.)

Apr. 26. Saturday. The Odd Fellows had their annual picnic today at Lodi. I have made eightytwo pounds of butter this week, besides being nearly sick with that painful tooth, and going all the way to Stockton to get it extracted. This is the largest amount of butter we have made in any one week. My face is fast recovering. Received letters from Horace, Willie and Calvin. Recently, at a match baseball game at Exeter, Calvin was hit upon the head and came near being seriously hurt. (T.S.R. 48. 2 P.M. 77. S.S. 68.)

Apr. 27. Sabbath. John O'Neil's baby was buried at Camps Seco today after a funeral at the Catholic church. I did not attend meeting, because I was so weary with the extra dairy work of the week past, with the added trouble of my sore face. Ida has written a very good letter to the Pacific, telling of the state of things there in church matters, and urging some one to come and take up the work which Mr. Pascoe laid down. She is working hard to superintend the two S. schools till some one does come. Rev. Warren seems strangely indifferent. Why does he not send some one? He says he cannot find a man to go. We all know it needs some one with the missionary spirit. (T.S.R. 50. 2 P.M. 78. S.S. 71.)

May 1. Thursday. This has been a fine day for the picnic in Clements. The locust trees are just now in full bloom, being fully two weeks later than usual this year on account of the wet Spring, and we have as yet no flies to speak of. Father today started for the East to visit relatives. He went off without