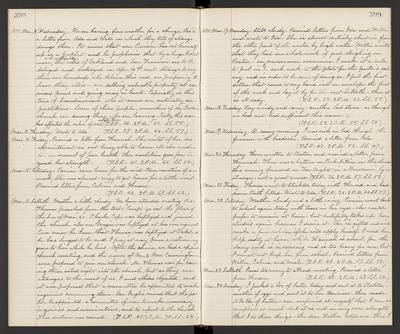 1890. Mar. 12. Wednesday. We are having fine weather for a change. Rec'd a letter from Ada and Will in which they tell of strange doings there. It seems that one Ericson has set himself up as a prophet and he prophecies that by a huge tidal wave and earthquake, the cities of Oakland and San Francisco are to be deluged and destroyed on Apr. 14th next. Strange to say there are hundreds who believe this and are preparing to leave these cities - are selling valuable property at ruinous prices and going away in haste. Especially is this true of Scandinavians, who it seems are naturally superstitious. Some of these people, members of Mr. Cooke's church are among those who are leaving. Really, this scare has affected the value of real estate there. (T.S.R. 34. 2 P.M. 60. S.S. 55.)

Mar. 14. Friday. Received a letter from Hannah. She writes of her disappointments in not being able to learn all she wishes to, on account of poor health. Her ambition goes far beyond her strength. (T.S.R. 41. 2 P.M. 66. S.S. 58.)

Mar. 16. Sabbath. Weather a little cloudy. We have attended meeting. Rev. Thomas preached from the text, "Except ye eat the flesh of the Son of Man", &c Charles Cope was baptized and joined the church, also our Georgie was baptized at his own request. Ever since he knew that Theresa was baptized at Oakland he has longed to be, and I pray it may prove a restraining grace to him while he lives. After the service, we had a special church meeting, and the names of Mr. & Mrs. Cunningham were proposed to join our church. Mr. Thomas was for having them voted right into the church, but as they are strangers to the most of us, I and others objected, and it was proposed that a committee be appointed to make inquiries concerning them. Mr. Inglis moved that the pastor be appointed a committee of one to make necessary inquiries and examinations, and to report to the church. This motion was carried. (T.S.R. 45. 2 P.M. 70. S.S. 64.)

1890. Mar. 17. Monday. Still cloudy. Received letters from Ida and Willie and wrote to Ida. She is almost entirely shut in from the other parts of the world by high water. Willie writes that they had one whole week on good sleighing in Boston - an uncommon occurrence. I make it a rule to put in $1. each week to the plate for the pastor's salary, and in order to be sure of doing so, I put the first dollar that comes to my hand into an envelope the first of the week and lay it by for the next Sabbath, then it is all ready. (T.S.R. 50. 2 P.M. 60. S.S. 55.)

Mar. 22. Saturday. Weather cloudy and a little rainy. Eunice went back to school again today with tears in her eyes - she would prefer to remain at home - but dutifully takes up her studies again because I desire it. She is gifted and will make a fine scholar, if she will apply herself. I need her help sadly at home, while Hannah is absent, for the dairy work is increasing and is too heavy for me, but I must not keep her from school. Received letters from Willie, Calvin and Uncle. (T.S.R. 48. 2 P.M. 57. S.S 50.)

Mar. 24. Monday. I packed a box of butter today and sent it to Stockton - another of eggs and sent it to San Francisco - then made 15 1/2 lbs. of butter - am surprised at myself that I can accomplish so much - but it is not in my own strength that I do these things - the dear Father helps me. Then I