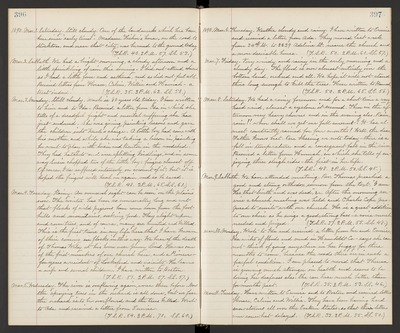 Mar. 2. Sabbath. We had a bright morning, a cloudy afternoon and a little sprinkling of rain this evening. I did not attend church as I had a little fever and asthma, and so did not feel able. Received letters from Horace, Calvin, Willie and Hannah - a treat indeed. (T.S.R. 35. 2 P.M. 62. S.S. 58.)

Mar. 3. Monday. Still cloudy. Uncle is 80 years old today. I have written to him and to Ida. Received a letter from Ida in which she tells of a dreadful fright and mental suffering she has just endured. She was giving painting lessons and gave the children into Uncle's charge. A little boy had come with his mother, and while she was taking a lesson in painting he went to play with Susie and Benton in the woodshed. They had hatchets and were splitting kindlings, and in some way Susie chopped two of the little boys fingers almost off. Of course, Ida suffered intensely on account of it, but it is hoped the fingers will heal on again, and so be saved. (T.S.R. 48. 2 P.M. 65. S.S. 61.)

Mar. 4. Tuesday. Rainy. An unusual sight can be seen "on the plains" now. The winter has been so unusually long and wet that flocks of wild pegions have some down from the foothills and mountains, seeking food. They alight upon and cover trees, and of course, many are hunted and killed. This is the first time in my life here that I have known of their coming in flocks in this way. We hear of the death of Thomas Wiley at his home near Jenny Lind. He was one of the first members of our church here, and a Pioneer - for years a resident of Lockeford and vicinity. He leaves a wife and several children. I have written to Boston. (T.S.R. 51. 2 P.M. 57. S.S. 57.)

Mar. 5. Wednesday. The river is overflowing again, worse than before. Now the spraying trees in the orchard is all done, but we fear the orchard is to be overflowed and the trees killed. Wrote to Ada and received a letter from Eunice. (T.S.R. 54. 2 P.M. 70. S.S. 60.)

Mar. 7. Friday. Very windy and rainy in the early morning and a cloudy day. The flood is now almost entirely over the bottom land, orchard and all. We hope it will not stand there long enough to kill the trees. Have written to Hannah. (T.S.R. 50. 2 P.M. 65. S.S. 58.)

Mar. 8. Saturday. We had a rainy forenoon and for a short time a very hard wind, almost a cyclone it seemed. Then in the afternoon very heavy showers and in the evening also. Rain rain!! when shall we get our full amount! It has almost constantly rained for four months! Well, the dear Father knows best. One blessing we note today - there is a fall in temperature and a consequent fall in the river. Received a letter from Hannah, in which she tells of enjoying three sleigh rides - the first in her life. (T.S.R. 48. 2 P.M. 50. S.S. 45.)

Mar. 9. Sabbath. We have attended meeting. Rev. Thomas preached a good and strong orthodox sermon from the text, "I am He that liveth and was dead", &c. After the morning service a church meeting was held and Charles Cope proposed to unite with our church. He is a great addition to our choir as he sings a good, strong bass - a voice much needed and prized. (T.S.R. 37. 2 P.M. 55. S.S. 48.)

Mar. 10. Monday. Wrote to Ida and received a letter from her and Eunice. Ida writes of floods and mud in Humboldt Co. - says she cannot think of going anywhere in her buggy for three months to come, because the roads there are in such a fearful condition. I am pleased to record that Theresa is growing much stronger in health and seems to be losing her deafness also. She can hear much better than for months past. (T.S.R. 35. 2 P.M. 53. S.S. 46.)

Mar. 11. Tuesday. Have written to Eunice and to Boston and received letters Horace, Calvin and Willie. They have been having hard snow storms all over the Eastern States, so that their letters were somewhat delayed. (T.S.R. 33. 2 P.M. 55. S.S. 50.)