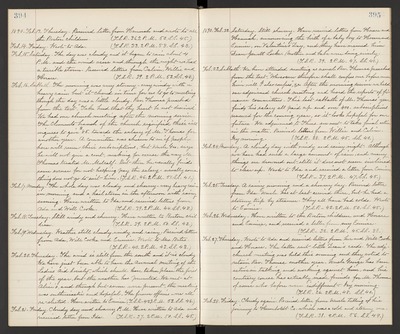 Feb. 16. Sabbath. The morning was very stormy - very windy with a heavy rain, but it cleared in time for us to go to meeting though the day was a little cloudy. Rev. Thomas preached from the text, "Take heed that thy heart be not deceived". We had our church meeting after the morning service. The Clements branch of the church signified their willingness to give $85. towards the salary of Mr. Thomas for another year. A committee was chosen to see if people here will renew their subscriptions, but Uncle Geo. says he will not give a cent, making for excuse the way Mr. Thomas treated Mr. Metcalf. But then he usually finds some excuse for not helping pay the salary - usually some thing does not go to suit him. (T.S.R. 46. 2 P.M. 51. S.S. 41.)

Feb. 20. Thursday. The wind is still from the south and it is cloudy. We have just been able to have the Annual meeting of the Ladies Aid Society, which should have taken place the first of the year, but the weather has prevented. We met at Alice's, and though but seven were present, the meeting was enthusiastic and hopeful. The former officer were all re-elected. Have written to Eunice. (T.S.R. 42. 2 P.M. 53. S.S. 46.)

Feb. 23. Sabbath. We have attended meeting as usual. Rev. Thomas preached from the text, "Whosoever therefore shall confess me before men him will I also confess", &.c. After the morning service we held our adjourned church meeting and heard the reports of finance committees. This last Sabbath of Mr. Thomas' year finds his salary all paid up and over $400. subscriptions renewed for the coming year, so it looks hopeful for our future. We adjourned to Thurs. eve next to take final action in the matter. Received letters from Willie and Calvin. Icy morning. (T.S.R. 28. 2 P.M. 45. S.S. 40.)

Feb. 27. Thursday. Wrote to Ada and received letters from her and Will Cooke and Horace. The latter sent little Dean's cards. The adj. church meeting was held this evening and they voted to retain Rev. Thomas another year. Uncle George has been active in talking and working against him, and his contrary course has actually made friends for Mr. Thomas of some who before were indifferent. Icy morning. (T.S.R. 26. 2 P.M. 48. S.S. 40.)